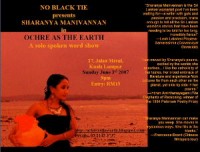 Ochre As The Earth
By Sharanya Manivannan
‘Sometimes I think you would have to be absolutely androgynous not to want to make love to me.’

As far as opening lines go, this one will forever stand out in my mind. They were the ones uttered by Sharanya Manivannan during her solo show, Ochre As The Earth. The show was held in No Black Tie on Sunday June 3rd 2007 at 9 p.m. Before I proceed to write a review of the show proper, I’d like to start with the poster.

I’m not an art critique by any measure but personally, I was very impressed with the poster/flyer. The photographer managed to capture that look of loss on Sharanya’s face and I wanted to know, “Why? What’s wrong?” This intrigued me enough for me to want to know more, and indeed, is this not what advertising is all about?

The list of items Sharanya presented that night are as follows:

To do justice to an analysis of her show, it is perhaps necessary to look at what happened that night from two different perspectives – Sharanya as a writer and poet and Sharanya as a performer.

Much has been made about Sharanya’s young age – she is currently 21 years old. Many have commented that for someone so young her writing is very mature. I choose to see her writing in these terms – Sharanya, has been writing since a very young age (for ease of reference, I’m going to use the age of 5). The majority of writers only begin their career as writers after they’ve completed school, the earliest being 18. If a writer starts to write at the age of 18, by 21, he is but a 3-year-old-writer. Sharanya, by virtue of having had the good sense to know that writing was in her blood from the very young age of 5, has had five times more experience in her chosen vocation. I would expect, therefore, that Sharanya’s work be good and it is.

As the show progressed, I found myself wondering what others would think about her opening line and further use of similar language, which most frumpish Malaysians know but are conditioned to think of them as swear words. Would they think her provocative? Would they think that her work was in bad taste? The thing is, when many others do say these words, it is swearing and sounds coarse and unrefined. However, when placed in the context and uttered by Sharanya, with such passion in her voice, you know that it’s ‘literary music’; one gets the feeling that she really understands the emotion behind each and every word uttered.

It must be said, this sexual element was not there in all the work she presented that night. The one poem I enjoyed was The Language My Mother Gave Me because for me, it was a window into Sharanya’s family and history and perhaps, in a distant way, my own. Her reference to works by the Indian freedom fighter, Subramania Bharati (for Suttum Vizhichudadar / Precious As The Eye), the inspiration from the Tamil Sangam period (for The Ten Idylls) and the knowledge of the detailed story of Karna from the Mahabharat are all a testament to her deep-rooted sense of identity and connection with India and Sri Lanka. Being inspired by Federico Garcia Lorca (for Cante Jondo For My Sacred Blood) and Sandra Cisneros’ You Bring Out The Mexican in Me (for You Bring Out The Sri Lankan In Me) were well thought out pieces which added that touch of ‘globalisation’ to her show.

As a performer, I cringe when I think of Sharanya’s performance in Ochre As The Earth. I cringe, not in horror but in a mixture of sheer envy and, perhaps, delight. Sharanya was able to single-handedly hold the attention of her audience for close to one and a half hours and that takes much energy and stamina. She overcame her inhibitions and … believe it or not … at one point, she even sang for us. Even when someone from the audience made a remark about plagiarism, Sharanya was quick to retort with an answer so suitable, the audience laughed with her. Such ability, such confidence and sheer guts brings me back to my original point that Sharanya is indeed a mature writer, poet and performer and Ochre As The Earth was certainly proof of this. Well done!

They can because they think they can.
Virgil
Powered By: WordPress Quotes