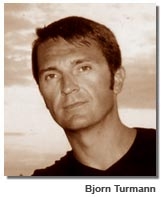 Bjorn first sent me an email informing me about the publication of his debut novel. When I did some research into his work, I found a fascinating story of a person who ventured away from his home and in the process become a man with some fascinating stories to tell. What interested me most was the part where he is interested in animation. I have always found the job of an animator interesting and so I jumped at the chance to interview him. Without further ado, let me introduce you to Bjorn Turmann.

Aneeta: Hello Bjorn. Thank you for agreeing to this interview.

Bjorn: It’s a pleasure. Thanks for taking the time to speak with me.

Aneeta: Before you explain about your work and your new novel, please, do tell me a little about yourself. Where did you spend your youth and how did you come to live in Asia?

Bjorn: I was born and raised in Vancouver, Canada. I went to high school and university there. A five month backpacking trip to Europe in 1986 opened my eyes to the world and after that I knew I needed to see more. I came home, finished university studies and then focused on trying to figure out where I could move overseas and work. A friend of mine suggested Singapore and so I packed up and came in 1993 with only $1,000 in my pocket and no confirmed employer. After a brief search, I found a good job. Singapore was perfect for me. I lived there until end-1998 and have been in Asia every since. I’ve loved every bit of my over 12 years here.

Aneeta: I understand that you have now made your home in Bangkok. Why Bangkok?

Bjorn: Bangkok is a great place for me to develop my creative projects. It’s a big city, so there is a lot going on that inspires my creative thinking. It’s also a low cost base, which helps. I’ve taken the time to learn the language and culture and I feel very comfortable here. That said, I hope I can develop some creative projects in Singapore, though. I would really like to find a reason to get back more often to the place where it all started for me.

Aneeta: I see that you own and manage a website with this address: www.pcgglobal.com, and from what I read, you are a Creative Marketing Practitioner. What is this?

Bjorn: Just wish I had more time to update and manage that website. It’s in need of new information – hopefully soon! I suppose these days I am more of a “creative entrepreneur”. I am involved in several creative projects in Asia and North America that keep me very busy. The animation and visual effects company that I co-founded in Vancouver (The Embassy Visual Effects) has grown into a very successful boutique size animation house. I am not an animator myself, but I do help with marketing and business development. I am also now writing a script for an animated film idea that I have set in Singapore. We have plans to try and get this started very soon.

Aneeta: You are clearly an independent filmmaker as well. So please, tell me about some of the films that you have made.

Bjorn: I’ve made 4 short films including one documentary called Benevolent Bodysnatchers which screened at the Bangkok Film Festival.

The other 3 shorts were all shot in Thailand.

Tracks is a docu-drama about life along the inner city Bangkok train tracks.

Postcards from Pattaya is the story of a failed relationship and the quest for paradise.

Gai Yaang is my latest piece, a five minute film shot in Phuket exactly one month before the tsunami hit.

The last two screened to strong reviews at the Melbourne Underground Film Festival (MUFF) in 2004 and 2005.

Bjorn: Good Daughter is a novel that looks at the words, thoughts and actions of five main characters (and several secondary characters) who have each made their way to Bangkok under differing sets of circumstances. The book focuses on one relationship – Som and Bill – but the issues and struggles surrounding them are not just unique to their lives, these issues are universal and play a central role in the book’s theme: secrets and guilt that bind.

With the mix of culture in the story – Thai and Western – the book also focuses on the problems that both sides have in communicating with one another. Cross-cultural struggle is a daily part of living in Bangkok. This “culture gap” can also be humorous, however, as we try to make ourselves and our experiences understood; humour that could be categorized as satirical and ironic. Good Daughter presents several of these situations because they help to illustrate other important themes in this ‘multi-layered story’.

It is definitely a novel that challenges the reader to look beneath the surface in order to try to understand what influences the characters’ behaviour and decision making. At the conclusion of the story we are shown that, by releasing ourselves from that which binds us, we are able to attain greater hope and, ultimately freedom.

Aneeta: Why did you choose to publish it in Asia and not in the West?

Bjorn: As a first time novelist the quest to get your book published is certainly a daunting task. The odds are overwhelmingly stacked against you. I read a statistic that approximately 100,000 manuscripts get written every year. Of that, 5% find a publisher – and only .01% of those are from first-time novelists. I was determined not to become a statistic! I literally searched the world for a publisher and/or a literary agent that could find me a publishing deal. It took a lot of work and effort but I was very fortunate to find one in Indonesia. Equinox is a successful company who has published many impressive titles.

Aneeta: I sure as hell know what work goes into publishing a book! I think if there is any one thing I wish I could do now is to become an animator. I used to draw my own pictures and loved seeing how the characters moved. So, I find it most interesting that you co-founded an animation company. What does your company do?

Bjorn: The Embassy Visual Effects is a boutique size animation shop that does work for film, television and the gaming industry. A lot of our projects are centred around 3D animation or computer generated (CG) visual effects. We have found great success in the television commercial field and have won numerous awards for our work with Citroen and Nike. We were also nominated for an Emmy for work on Stephen King’s “Kingdom Hospital”. Like you, I am also a huge fan of animation – especially Bugs Bunny cartoons or any other work from famed animation director, Chuck Jones. As mentioned, I hope to complete my script for the Singapore based animated feature film very soon.

Aneeta: You have a marketing philosophy called ‘Emotionics’. I understand that you developed this. So please, explain what this is all about.

Bjorn: Emotionics is something I developed because of the need for marketing to look at consumers in a totally new way. Emotionics is, as I like to say, a ‘new business philosophy’. Consumers’ tastes and preferences are changing so rapidly. There are so many things out there now for people to occupy their time and spend their money on. We are literally bombarded everyday by media that tries to influence us in some way. What Emotionics says is “the only thing we really own is our emotions and feelings and marketers must start to understand this better in order to effectively build brand and long-lasting, meaningful consumer relationships”. Although very new, the response to Emotionics has been extremely encouraging and the objective is to build a much larger ‘think tank’ around it in order to put some strategies together for various clients who have expressed serious interest in it.

Aneeta: One last thing. How can people contact you?

Bjorn: My telephone number is +661-938-0608 and my email is bturmannatpcgglobaldotcom

Aneeta: Thank you so much.

Bjorn has published his second book and here’s the info he sent me:
The Karaoke World of Cortous Haire the second novel by Southeast Asia based Canadian writer, Bjorn Turmann – October 2006

One man’s adventure tale that is comic, tragic, outrageous and heart-warming, The Karaoke World of Cortous Haire stretches from Singapore at the time of the turbulent ’97 Asian economic crisis to Thailand and Laos at the uncertainty of the new millennium.

Possessing no job and very little money, university graduate Cortous Haire lands in Singapore in early 1997 and finds employment as a karaoke video marketing executive with a local firm. When his boss suggests that they need to “find a star and make her big in Laos”, Cortous’s story becomes a series of experiences and obsessions, mysteries and calamities that eventually lead him to deeper inquiries about life and how to live it.

The world’s first novel about karaoke or a karaoke novel about the world’s firsts? With originality and purpose, The Karaoke World of Cortous Haire calls out to all generations who have left home in order to seek something that, at the time, they never thought they’d ever find.

“An engaging, often comical travelogue….the surreal otherworldliness of karaoke is the perfect running metaphor for Cortous’s adventures in a part of the world that will entice readers at every turn.”
J.P. Zingrone, freelance reviewer, Toronto Star

“Turmann’s vivid depiction of Southeast Asia serves as a dynamic backdrop for a story that is at once poignant and surreal.”
Kevin O’Rourke, author of Reformasi

“An off-beat karaoke thriller from an author who injects his vivid imagination into every scene. You’ll never look at karaoke in the same way again.”
Stephen Leather, best selling author of Private Dancer and eighteen other novels

You can't build a reputation on what you are going to do.
Henry Ford
Powered By: WordPress Quotes