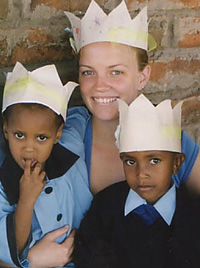 Gemma was a teacher at my old school, New England Girls’ School between 1998 and 2001. This school is in Australia. She has since left the school, moved to Tanzania and set up her own school, School of St. Jude. What she has done and achieved so epitomises the motto of our common ‘friend’ [NEGS], Whatsoever you do, do it heartily as unto God!

It gives me great pleasure to introduce to you, Gemma Sisia.

Aneeta: Hello Gemma. Thank you for agreeing to this interview. You and I have a common ‘friend’; New England Girls’ School in Armidale (‘NEGS’) – I studied there and you taught there. Before we speak of NEGS and your own school, St. Jude, tell me a little about your early life in rural Australia. Tell me about your childhood, your family and a little about life on a property.

Aneeta: How did you come to be involved with Africa?

Gemma: I did a few years of volunteer work in Uganda-East Africa when I was young. I returned home to a rewarding teaching job and a comfortable lifestyle. However, I could not forget the poverty and suffering I left behind.

I convinced my friends and family to pledge at least $5 a month to be put into an account at the local bank. The result of this project was to collect enough money to enable 2 young women to go to school in Uganda. It would also allow them to pursue tertiary education.

Aneeta: Now, tell me about your years in NEGS. When were you there? Did you always want to be a teacher and what were your experiences there?

Aneeta: I understand that you married a gentlemen from Tanzania – this is a very interesting aspect of this entire story – do tell us, how did you meet your husband and what was it like to move from Australia to Africa?

Gemma: I met Richard on safari … he showed me my first lion and we fell in love in the Serengetti Plains. He is the most wonderful man and the perfect partner as living here is really tough. I now realize that God gave me Richard as there is no way that I could have done what I have done without marrying Richard…it was meant to be.

Gemma: Arusha is the fourth largest city in Tanzania with a population of 1,640,000 (1995 Census). Arusha’s elevation is 1340metres above sea level and enjoys a temperate climate throughout the year.

A commercial airport services Arusha, however the internal airfares in Africa are expensive and road access from the neighbouring Kenyan capital of Nairobi, a four hour bus trip, allowing for a 1 1/2 hour border crossing is a better alternative.

Road transport between the major cities is on well-constructed bitumen roads that are in fair condition. Other roads are poor quality gravel roads and four-wheel drive vehicles and buses are the preferred forms of transport.

Trucks and other heavy transports regularly travel the road and there is no real problem accessing the school site. Most locals walk the road from the surrounding villages to Arusha but regular bus services are well patronised but overcrowded.

Taxis service the area (one way approx. US$4)

Access to the school site is by an unformed road that is in reasonable condition. The site is on the foothills of Mt Meru (4556m) a spectacular vista on a clear day. The site is flat to gently sloping on very fertile and well drained soil. The vegetation is lush and green and has a diverse selection of tropical and temperate climate fruits and vegetables.

The site is owned by the East African Fund and comprises 15 hectares in total.

Aneeta: Before we go in detail about the school that you set up, please tell me about your philosophy in education.

Gemma: I believe that the only way to fight poverty is through education…..and I see it working everyday as our 500 plus children go to and out of class.

Aneeta: Tell us about your experience in setting up your school, St Jude, from ground up. What did this involve? I can see that part of the process was designing the uniforms for your children.

Gemma: It began as a gift. My husband’s family gave us a small piece of land in the village of Moshono on the outskirts of Arusha. Once cleared, Gemma set to work planning, designing and organising the building of the first classrooms for the initial charity run and owned primary school of the East African Fund Incorporated, The School of St Jude.

The School of St Jude was established in 2002 with only a few students. The school boasted over 400 in 2004 and opened in January 2005 with over 500 students. More than 85% of the students come to the school totally free of charge thanks to the sponsorship scheme. They are provided with tuition, hot meals, uniforms, stationary and transport on school buses.

It seems very romantic to build school in Africa but it is just hard work from morning to night. I constantly have to teach parents as well about the value of education, I am dealing with all sorts of builders, electricians, plumbers, carpenters, teachers, parents, government officials, uniform makers, hardware shops,….oh, so many different facets!!!

Every minute you have to put on 5 different coloured hats as its not just about managing an existing school but its about starting up, continuing and building a school from scratch!! The admin, then staff rules, the buildings, the kitchen, the books, the classrooms, the library, the computer room….all of it has to be built from scratch and materials found to fit them out!! And when you are just collecting donations because there is no government help, its gets really tough!

Aneeta: This East Africa Fund, what is it?

Gemma: To educate the poor in Africa and to use donated funds properly and for the purpose of which the donor intended! The East African Fund Incorporated (EAFI), has grown into a registered Australian charity (No: CFN16123) in a few years to which thousands of people pledge their donations to ensure the charity’s motto ‘Fighting Poverty Through Education’ is put into practice. Many people also give non-financial donations of goods and services and their time to the charity’s projects. Donations are deposited into the charity’s bank in Australia and virtually 100% of it is sent to Africa for the educational projects.

Aneeta: What is the religious basis of your school and what is the medium of instruction there?

Gemma: It is essentially a Catholic school but we have leaders from other denominations who come every Friday to teach the children in the religion of choice. The language that these children speak is Swahili but the medium of instruction is English.

Aneeta: In all of this, you have made the transition from teacher to business-woman. I understand that you have also been nominated as the Australian Businesswoman of the Year. When was this and what was the experience like?

Gemma: I think it was about 3 years ago….just before opening the school. I was one of the finalists. Actually it was not really a highlight for me as I am not into that type of scene.

Aneeta: I also see that your most recent attempt at fund-raising was a trip to Hobart for the Rotary District 9800 Conference 2005. Now, I must confess that I have a soft spot for the Rotarians for the Rotary Club of Armidale awarded me a prize for citizenship in my final year at NEGS. So whenever Rotarians are mentioned, I have this happy memory that pops into my head! But, I digress. Tell me about your attempts to raise money for the school. How successful have they been? What do you need for your school now?

Gemma:It is just totally hard work but after the last few years since setting up the school in 2002, I can now see that its moving itself a bit and current sponsors came from older sponsors and so forth….its nice.

Aneeta: Well, Gemma, this is all we have time for. Is there anything else you would like to add?

Gemma: When are you coming for a visit? Next to having the most beautiful children, we also have the best African wildlife in the world just outside the school door as well!

Aneeta: I will come someday. I promise. For now, I promise that my readers and I will try to do all we can to help your most noble cause.

Cherish your visions and your dreams as they are the children of your soul, the blueprints of your ultimate achievements.
Napoleon Hill
Powered By: WordPress Quotes