I received an email from Regina Kuan sometime ago telling me about the upcoming Singapore International Story Tellers Festival. She asked me to list the people I’d like to interview and frankly, I’d like to interview everyone!  Still, Nury was one of the first I asked for an interview. He agreed to my request and without further ado, I have great pleasure in introducing to you, Nury Vittachi …

Aneeta: Nury, thank you for agreeing to this interview.

Nury: The honour is all mine, fair maiden. Let the battle commence.

Aneeta: Usually, I like to ask people to start by telling a little about where they grew up, their youth and so on. But with you, your name alone is a point of conversation. I’ve read, on your website, http://www.misterjam.com, that your full name is Nuryana Samjam Perera de Lacey Vittachi. Now, for the benefit of my readers, do please explain this derivation.

Nury: It’s a legal requirement for South Asians to have long difficult names.

I wanted to be called Bob.

My Arabic first name, Nuryana, was given to me at birth by a Javanese holy man my parents followed. Unfortunately, I think he must have been having an off day.  It is a female name so I was on the girls’ register at every school I ever attended. My mother won’t let me change it so I may have to change sex.

Samjam is my Chinese name. It may sound interesting, but it is not very poetic. It means “Third Bus-stop” and refers to where I used to live.

Perera is a European name which became our family surname after our island (called Ceylon) was colonized by the Portuguese.

De Lacey is a French-Irish name which I acquired through marriage. My wife is the last of her family line which is why we had to join her surname to mine after marriage.

Vittachi is a Sinhalese name, and was our family name before Ceylonwas colonized. It was revived by my father, who did not want to have a Portuguese name.

So now I have a long name and cannot be arrested by the South Asian Long Name Police. However, I still wish I was called Bob.

In real life, most people just call me “Mister Jam” or “Hey you”.

Aneeta: I’ve watched you on the May Lee Show – the segment on People and Places. You’re giving her a tour of Hong Kong. Clearly, you know the island well. Have you lived inHong Kong all your life?

Nury: I arrived inHong Kong 20 years ago with just nine US dollars in my pocket. Now, two decades later, I owe Hong Kong Bank more than 200,000 US dollars. Yes. I’ve made it!

How did I get here?

When I was born in Sri Lanka in 1958, war broke out. I don’t think the two incidents are connected. But I still feel guilty about it.

In the early 1960s, we had to leave Sri Lankain a hurry, encouraged by men with guns, because of something my father wrote. It thought this was way cool.

We first went to Malaysia and then to UK. In my 20s I came back to Asia.

So that’s why these days I live in Hong Kong with my three children (or four if you count my wife).

Aneeta: Forgive me for saying this but from your Arabic-Chinese-Portuguese-French-Irish-Sinhalese full name, there just be a story in there somewhere! Have you tapped into this aspect of your life in writing and publishing your 13 books so far?

Nury: My name just shows that we are all mixed-up kids these days. And cultural mixing has been a theme of many of my books.

Aneeta: Of the 13 books, can you please choose three of your favourite, describe them and tell me why you chose to write them.

Nury: Actually, I’ve probably written at least 30 books, if you count all the children’s books and non-fiction ones, and have three more in the pipeline.

My best known book is The Feng Shui Detective, which is part of a novel series, now five books long. In it, our heroes travel aroundAsia/st1:place> and solve crimes using a mixture of ancient wisdom, intuition and logic.

The books are about Mr Wong, from China

Mr Wong can’t understand Joyce at all, which baffles him because they are both speaking English, aren’t they?

Eventually he works out that the English word for Yes is “whatever”.

And he works out that the English word for No is “yeah right”. 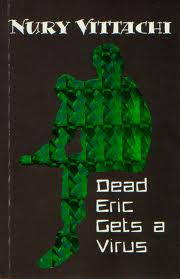 Dead Eric Gets a Virus is a book about a boy who downloads his brain into a super-computer. The experiment kills him, but his brain is alive in the computer memory. So he inserts a wireless internet chip into his corpse’s neck and brings it back to life. So he goes back to school, and lives a perfectly normal life—except for the fact that he is dead.

Twilight in the Land of Nowhen is a story based on Einstein’s theory of relativity. A boy finds that he is living three seconds ahead of everyone else. To understand why, he needs to learn how time works—and only Einstein can explain that.

Nury: The ALR is a journal of Asian writing.

Asian culture will be the world’s leading source of entertainment – books, movies, music and other arts — within 20 years. Decisions on what is successful in this sector are made by consumers, not business people. Already more than 60 per cent of the world’s consumers are Asian, and that proportion is set to grow. The takeover is inevitable and unstoppable.

I started the Asian Literary Review to highlight the work of Asian writers and poets. I’m fed up with the imbalance. Why should all our culture come from Disney?

I’ve also helped set up literary prizes to encourage us all to write.

I am chair of the judges of the Australia-Asia Literary Award which gives out more than 100,000 US dollars for the best story each year. And I even started an award for unpublished works, called the Man Asian Literary Prize.

If you won’t write a piece to help me in my mission, at least write one for the money!

Aneeta: I know that you have attended many festivals, namely the Ubud Literary Festival and also now, the

Singapore International Story Tellers Festival in August. Why do you think it is important for authors to attend such festivals?

Nury: For most authors, writing can be a lonely job—you hide away for months to produce a book. So festivals are a good way to meet your readers.

But these days I decline most invitations to go to festivals: I just go to a few every year. These days I write a daily blog on my website so I can interact with readers all the time.

But I like to visit festivals occasionally. The hosts are always charming. Next time I am going to insist that they address me throughout the visit as “Bob”.

Aneeta: Why not start here, Bob? As you know, this website caters for storytellers. What advice would you give those who are keen on venturing into this vocation?

Nury: Don’t try to make a living as a writer. Go and do a proper job. No, seriously. Be a reporter or a teacher or a broadcaster. Write for fun in your spare time instead. Writing literature is a terrible career, especially here inAsia. Unless you have a rich family member who is going to support you while you write, you need to get a job that supplies you with your daily bowl of rice, and then you need to do your writing on the side.

Also, your parents and friends will shake their heads in dismay if you decide to make something creative your life – writing, painting, music, art.

But that doesn’t mean you shouldn’t write or do creative things. You definitely should.

But having followed the careers of lots of creative people, I have learned that very few of them—maybe one in a thousand—have enough energy and drive to make a good career by going straight into their art.

The other 999 are better off doing a safe job that gives them some sort of security, and then gradually developing their creative projects until they have grown to a healthy enough state. Then they can quit their day jobs.

Aneeta: Nury, this is all I have to ask. Is there anything you’d like to add?