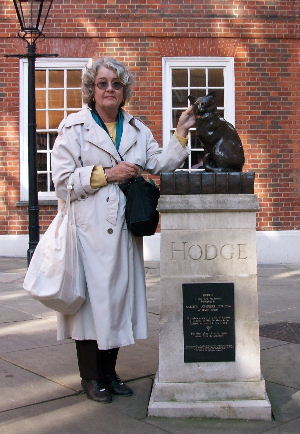 In Karen’s words: Here’s a picture taken recently when I was in London. The place is Gough Square, site of Dr Samuel Johnson’s house, which has been restored and runs as a small museum about that great man of words and letters, the father of the first real dictionary in the English language. The statue depicts one of Dr Johnson’s cats, Hodge, remembered for his fondness for oysters. There is a bronze oyster shell on the plinth by his feet, and people–especially writers–often put a shiny coin in it for luck.

Rita Toews wrote to me to me last week to say that Karen Treanor had read the interview with her and wanted to know if I’d be interested in Karen’s work. I visited her website and I was very impressed with what I read. I will leave you to read the interview below and become equally impressed. Without further ado, I have great pleasure in introducing you to Karen Treanor …

Aneeta: Karen, thank you for agreeing to this interview.

Karen: Thank you for the invitation, Aneeta.

Aneeta: Let’s start with something about you. Please tell me a little about your life thus far – where were you born, where did you grow up, what do you do for a living and where do you live now?

Karen:I spent my first 18 years in a small town, Boxford,  just north of Boston, Massachusetts.  I went to Boston University, worked for a few years for a couple of newspapers, got married, had two little girls and then my husband saw a small classified advertisement that said the Peace Corps was recruiting experienced tradesmen.  They knew most of the people who’d be suitable would be married men, and were trialling the idea of sending families into the field.  My husband, Gene, was recruited to re-open and revitalise the National Joinery (Woodworking shop) in the Kingdom of Swaziland, and I tagged along as what they called a “Non-matrix Spouse”. That meant nobody had asked for my skills particularly, but I was expected to find something to do.  I worked on several projects, including “Swazicraft”, which was an export company designed to help local people market their handcraft overseas; also the national magazine “Swaziland Today” and on a literacy project, which is how I got into book publishing for children.  I also had a son while we were there.

We later spent five years in Lesotho, another small southern African kingdom, and then settled in Western Australia, where we’ve been ever since.  I live in the Hills area above Perth, the world’s most remote capital city, which was named “The City of Lights” by John Glenn on his first orbital flight in 1962.  People put their porch and garden lights on so the city would be a bright spot in the vast darkness of the Indian Ocean as the astronaut flew through the night.

Aneeta: On your website, (http://www.bandicoot-books.com/bio.html), it is stated that you have been writing about animals since you were six. This is a very interesting comment to make. Why animals?

Karen: My mother, a registered nurse, was interested in all small creatures, and was often the recipient of injured or ill baby birds.  We always had pets: dogs, cats, canaries, a few chickens, and a turtle.  She was also a voracious reader and encouraged me to read early by giving me one or another of the Thornton W Burgess nature story books every birthday or Christmas.

Aneeta: For the benefit of my readers, can you please explain, what are bandicoots? Why did you choose them for the name of your series of books – Scoot, Scoot Bandicoot?

Karen:  Bandicoots are a family of small marsupials native to Australia. There are a few species in New Guinea as well.  The name is what the English settlers gave them, because they resembled a species of rat they knew in India, called pandikokku in the Telugu language.

The taxonomic name for the Southern Brown Bandicoot is ‘isoodon obsulus’, ‘the little fat creature with equal-sized teeth’.  But the name I like best is ‘quenda’, which is the Nyungar language word, and is the name of my publishing company.  The Nyungar people lived in this area long before Europeans settled here. 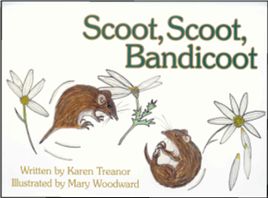 The first book in the series was Scoot, Scoot, Bandicoot®, which is the tagline all the adult animals use to tell the little bandicoots Bounce and Pounce to run along.  I then trademarked the phrase and used it as the supertitle for the subsequent books in the series.

Aneeta: I understand that you have 4 books in this series: Bounce’s Sore Tummy, Scoot, Scoot, Bandicoot, The Big Red Bucket, Pounce’s Special Friend. Can you please describe each one?

Karen: The original story was Scoot, Scoot, Bandicoot. This details the problems Bounce and his sister Pounce have when they are trying, with the best of intentions, to help their grandfather, who has a sore back.  One disaster follows another until they finally ask Mom what the problem is and are then able to find a genuine solution. 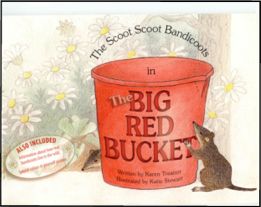 Book 2, The Big Red Bucket, has Bounce following his nose into trouble, something he does fairly often. In search of food, he falls into the scrap bucket and can’t get out.  Book 3 Pounce’s Special Friend, was written at the request of several librarians and teachers, who wanted me to do a ‘stranger danger’ story. I was not keen to do this, as it’s a very delicate balancing act to handle such a topic for five to eight year olds. 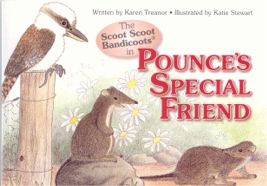 But with the help of a woman police constable from the Perth Police Cyber-predator Team, I think the book worked out well.  Pounce, the girl bandicoot, is the main character in that story.  The most important point in the book, I think, is “If someone doesn’t want to come home and meet Mum, it’s probably not the sort of friend you want to have.”

Book 4 is the story of Bounce and his bottomless stomach again—this time he eats something he shouldn’t and the result is nearly fatal.

This book allows the teacher or parent to introduce several topics for deeper discussion, including the concept of illness, hospitalisation and death, as well as reinforcing the idea that when Mom says “don’t eat strange things” she should be listened to.  All four of the books have a moral which the adult reader can use as a basis for further discussion if they wish to.

Book 5 is in production at the moment.  The Scoot, Scoot, Bandicoots® in Where’s Our Dad? shows different families with different structures, and deals with the not uncommon problem of the absentee father.

Aneeta: Most publishers I know have story upon story about how difficult it is in the publishing industry. I would like to focus on the positive aspects of this venture. Do you have a happy story about your experience as a publisher that you can share with us?

Karen:  It’s a chain of happy stories, really.  Several times a year I visit schools or libraries and give talks to children about books.  We talk about how they are made, from the initial idea to the final product, why they are important, and I try to reinforce the idea that reading is the best skill anyone will ever learn.

The single stand-out happy story would be this one:  Several years ago I was invited to speak to the second graders at the EllenbrookPrimary School in Western Australia.  The children were a lively and interested group, and I read the third book, Pounce’s Special Friend, in draft to them.  All I had were the ‘roughs’ from the artist, and two or three finished colour illustrations, but the children got the idea.  They made suggestions and comments, which were helpful to me as the publisher.  When I went back to the school two months later to show them the published book, they showed me the book they themselves had written and produced at the school, a very polished presentation called “The Clever Little Head Louse”.  Their teacher told me they’d requested to do this special project, and had come up with the ideas themselves, the story line, and the illustrations.  I was so impressed I suggested to the teacher that they should investigate producing multiple copies and sharing them with other schools in the area.

Aneeta: That is a really good story. I can only imagine your sense of satisfaction. Thank you. Clearly, your work will involve many elements of storytelling. Which aspect of storytelling do you use the most in your work?

Karen:  That’s a hard question.  I like a bit of humour in a story, so all these books have some of that.  I’ve made up several words with the suffix ‘–coot’ and children seem to enjoy that:” “Scaredy-coot” and “rudey-coot”, for instance.

I think stories for little ones should end on a high note, so all four books have a happy ending, even if there’s some scary business prior to that.  For young readers, repetitive, cadenced phases seem to be something they enjoy—that’s what led to the original catch-cry “Scoot, scoot, bandicoot”.  I was delighted to head a young mother using that to her three year old in a local shop recently.  I think a story should give you information you didn’t have before you read it whenever possible—that’s why in the back of each bandicoot book there are several pages of ‘real life’ information, for those children who want to know more.

Karen:  The most important thing is for the story teller to want to share her story.  If you don’t feel the story you have to tell is important, why would anyone else feel that way?  One of the main drivers behind my stories is my determination to make people more aware of the southern brown bandicoots that live around our towns and suburbs. They are useful, friendly little animals, and they should not be chased and killed because they are mistaken for rats.

Aneeta: Karen, this is all I have to ask. Is there anything you’d like to add?

Karen:   I’d encourage your readers to visit the website, www.bandicoot-books.com, and look at some of the photos and read some of the bandicoot diary stories about the real live bandicoots that visit my yard and home.  We have credit facilities for people wishing to buy the books.  And if people would like to see my amateur video footage of bandicoots, check out my Cootspal site on YouTube. Here’s one of them:

When I let go of what I am, I become what I might be
Lao Tzu
Powered By: WordPress Quotes