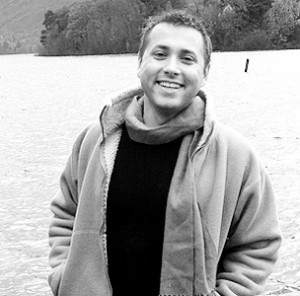 This interview is a little different in its style from my normal ones and you’ll see why soon. So, without further ado, I have great pleasure in introducing to you Karl Moore …

Aneeta: I’m chatting today with Karl Moore. Now Karl is an author, a developer, an entrepreneur, a self-development guru, and a whole bundle of others things. And that’s why I’m so thrilled to be speaking with him today. Hello Karl!

Karl: Hello Aneeta! Great to be chatting with you!

Aneeta: Firstly, rescue me from confusion. Are you Karl or Karlos?

Aneeta: I see. Now, I’ve followed your work for some time and was browsing through your official site again this week. For those that aren’t aware, you’re the man behind www.karlmoore.com. I know you’ve done a lot of writing, Karl – tell me how you got started.

Karl: Well, it all began in the backseat of a Mondeo some eleven years ago. I remember reading through the articles in “Micro Mart”, a large UK computing magazine. And I sat back and thought “Hey, I can do better than that!”

So I did. I literally hassled the editor until he gave me a weekly column. I worked hard and continued to deliver solid content week after week. Then that one column turned into three, which then turned into a syndicated feature. And that’s where it all started.

Aneeta: So, determination was the key for you.

Karl: Undoubtedly. Just write, even if you’re not being paid wonderfully. The rewards will come later. Good writers are hard to find, and editors know it.

Aneeta: I know you’ve moved on a lot from those early days. You’ve written for dozens of magazines and newspapers – and now have a couple of books out on the market, one of which has been translated into many languages. Did you look forward to the publishing process?

Karl: Well, I think most writers are initially wary of the whole publishing world. They write their book thinking they’re the only person involved. They just type into Microsoft Word, send the file to a publisher, and Bob is your proverbial uncle.

Karl: But it’s not like that. Writing a book involves many individuals. My book went from the editor to the technical reviewers, from the legal department to the indexer. You don’t write on your own. And then of course, you have to edit.

Aneeta: Let’s talk about your work at Writers FM. What is this site?

Karl: Well, Writers FM is an online radio station we setup about a year ago. It’s a totally free service. A little like your site, Aneeta, we setup the service to help authors grow. By listening to me interview other authors about how they made it, hopefully listeners will gain a little inspiration.

Aneeta: If anyone reading this hasn’t yet visited the site, be sure to tune in online at  www.writersfm.com. You’ve interviewed an impressive number of individuals, Karl. Who was your favourite and why?

Karl: Now that is difficult. I would probably go for Edwina Currie. In the UK, she’s pretty well-known. She was the Health Minister for some time, then later revealed she’d been the secret mistress of the Prime Minister. So she’s hit the headlines a few times, and her books always rocketed into the best-sellers list. We enjoyed an excellent banter – and our forty minute interview ended up being one hour and a half!

Karl: I really enjoyed chatting with Lucinda Hawksley, who is the great-great-great granddaughter of Charles Dickens. And Joe Vitale too, who developed a “system” for getting his book to the #1 best-selling position at Amazon.

Aneeta: Let’s chat about another writer’s resource you’re involved in. This time it’s a forum – My Writers Circle at www.mywriterscircle.com. Now this is a resource you helped to create…

Karl: Yes. We setup My Writers Circle way back in November 2005 and it’s grown fantastically. At last check, we had some 3200 members. But we couldn’t have done it without the fantastic work of Nick Daws, and our wonderful moderators. Nick is a fantastic author – and I know you’ve interviewed him on this site previously, Aneeta.

Aneeta: Absolutely. He’s inspiring. And talking of inspiration – I’ve been subscribed to your blog, Karl…

Aneeta: Back in October 2005, you started your own personal blog online at www.karlblog.com. Practically every day you post your inspiring thoughts. I’ve seen you described by others as a “self growth author” – and you’ve certainly helped me to reflect!

Aneeta: Would you recommend blog writing?

Karl: Yes, but for a specific reason. I found that it took a good few years to develop my writing voice. Create your own blog and force yourself to post every day for at least a year. Then check back on your original posts. See how your style has developed.

When I began writing, I was forced to churn out articles week after week. The early ones were terrible. Today, writing comes as naturally as breathing. Blogs are great for developing your voice, because you can write just as little as you want. And a little, frequently, really helps mature your style.

Aneeta: Fantastic advice, Karl. I’m guessing that after all your experience in the industry, and after interviewing so many well-known authors, you’ve picked up one or two tips on writing. The sort of advice the story-tellers reading this would love to hear. What top tips can you share with us?

Karl: Great question! Firstly, keep your writing readable. Short sentences, simple words. Anything else is confusing. Secondly, don’t give up. If you’re the sort of person that can’t bear to see a rejection slip, writing isn’t for you. Finally, give yourself time to find your voice. This will only happen with constant writing. If you don’t put in the effort, you won’t get the rewards.

Aneeta: Fantastic. A lot of story-telling writers tend to get stuck in writers block – and I’m sure your advice will help. Anything to add?

Karl: Well, I used to do a little “story-tellers coaching.” And my favourite trick for getting out of “stuckness” in fiction is to shift the scene and start from somewhere else. Perhaps start the book after the murder has been committed, or change the scene to a flashback, or put the beginning at the end, or the end at the beginning. Don’t think in timelines. Stick yourself in a corner of the scene, at any point throughout it, and just write what you witness.

Aneeta: Wow. That’s clever. Anything else you can share?

Karl: You bet. Unlike most writers, I can’t stand mornings. All of my most productive writing happens post-midnight.

Aneeta: Yes. I figured that out since the time noted on all the emails I receive from you are somewhere in the middle of the night!

Aneeta: It’s been a true pleasure. Allow me to thank you so much for spending your time with us here today! I hope to see you again soon!

Karl: My pleasure. Thank you!

The Win-win Storyteller! – an interview with Mridu Khullar (29th of June 2006)

History is a relentless master. It has no present, only the past rushing into the future. To try to hold fast is to be swept aside.
John F. Kennedy
Powered By: WordPress Quotes