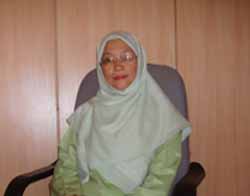 ‘ Aneeta Sundararaj ploughed through the jumbled mass of words I initially came up with and correctly pointed out that what I needed was “structure”. Her generous nature and spirit made her an excellent mentor.’

These were the words Jamilah wrote in the ‘Acknowledgements’ page of her new book, Cool Mum Super Dad. Each time I read the words, I feel all warm inside. Indeed, I must say the it was an honour to be part of Jamilah’s project and it made me all that more proud when she told me, some time ago, that she’d found a publisher. I am really very happy to introduce to you a lovely person and without further ado, here’s Jamilah Samian …

Aneeta: Jamilah, thank you for agreeing to this interview.

Aneeta: Jamilah, for the benefit of my readers, please tell me something about you. Where were you born and brought up? A little about your family and what you do now?

Jamilah: I was born and bred in a small village in Batu Pahat, Johor. My parents were simple yet gritty kampung folk who shared a dream that all their five kids will go to university – a dream that they pursued and achieved with much hardship and determination. My dad, especially, was a man who lived by his principles. I still remember how he refused to accept any book loans offered by the government (his reasoning: “You can’t have the books for future reference since you have to return them at year’s end”) or purchase second hand books (“second hand books are useless as they may have torn pages.”) He and my mum scrimped and saved so that my siblings and I would have brand new books every beginning of the school year and settle the school fees right on time. They really made me feel proud of who I am and my roots and because of this, I never felt underprivileged although the fact was that I was brought up in a poor home. My parents impressed upon me how important learning is and to strive for what I believe in.

Aneeta: How did you get into writing?

Jamilah: My father was the one who planted the seeds of writing in me. When I was fourteen, he began subscribing The New Straits Times everyday. Buying a newspaper on a daily basis may not be much to you and me but as I said, my father earned barely enough to put food on the table. There was a little column that appeared on a regular basis in the NST those days called As I Was Passing by Adibah Amin. I loved that column. Everytime I read it, I would think, “One day, I will write like this.”

Aneeta: Let’s talk about your book, Cool Mum, Super Dad. Describe it for my readers, please. 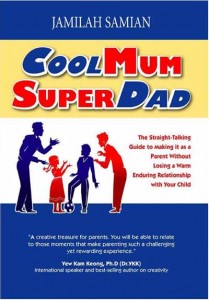 Jamilah: Cool Mum, Super Dad took two years to write and is essentially a guide that shares with readers what they need to do to make it as a parent without losing a warm, enduring relationship with their kids. I had been planning to write this book for some time but only started on the actual manuscript in January 2004 and completed it in end 2005.

Aneeta: In what genre have you categorised this book and why?

Jamilah: Creative non-fiction. The book has two parts – stories and theory. The stories are an integral part of the book.

Aneeta: How did storytelling fit in with this genre?

Jamilah: Creative writing has a lot to do with telling stories. I chose storytelling because I myself love to read stories. A story portrays a thousand words. I can’t imagine the book without stories. The stories are weaved into the theory bit to illustrate the points I was trying to make in each chapter.

Aneeta: What kind of research went into this book?

Jamilah: Lots of reading, and observations of many other families as well as mine.

Aneeta: Has anyone in your family actually read your book?

Jamilah: My daughter who did the artwork has read the entire manuscript before it was published. Her brothers and my husband read it after it came off the press. But I must say they have been very supportive all the way.

Aneeta: Do you have a specific target audience for this book?

Jamilah: Anyone who has a hand in raising a child. From parents to step parents, to uncles and aunties, to educators.

Aneeta: What do you see as the most important part of this process of writing?

Jamilah: The most important process in writing is to be able to say what you want to say, exactly the way you want to say it. But that’s a goal actually and not something that will happen the first time you put pen to paper. The process itself may take many rewrites. Cool Mum, Super Dad was rewritten many times before it was given to feedback providers and an editor. Then, based on their feedback, I rewrote it several more times until I was certain every word was where I wanted it to be. Writing demands mental stamina.

Aneeta: Your book has been published locally, yes? Did you find much difficulty in locating a publisher?

Jamilah: I did not find much difficulty in finding a publisher. But I did all I could before I actually started looking for a publisher. I prepared a synopsis and a proposal and made enquiries as professionally as possible.

Aneeta: What are your plans for the future? Any more books? Your dreams?

Jamilah: Working on my second one now. I have already started research for a second book but I’m not at liberty to elaborate at this moment. My dream is to be able to write as well as Lat (an acclaimed Malaysian cartoonist) can draw.

Aneeta: As you know, my website caters for storytellers. What advice would you give to my readers?

Jamilah: Firstly, don’t let self-doubt sabotage your mind. Secondly, find out about other successful writers and what it took them to be where they are. For me, I look up to J.K. Rowling and John Grisham for their determination and perseverance more than anything else. Rowling took ten years to have her first book published. Grisham had to buy almost the entire stock of his first book from his publisher two years after they were printed because they didn’t sell. He gave tea-talks every weekend until it became a best-seller. Whenever I feel my morale sagging, I ask myself: Have I put in enough effort and commitment like these two? Have I worked on my manuscript long enough like JK Rowling to be frustrated? If my books don’t sell, have I worked hard enough like Grisham to market my book? This helps me put things into perspective. Thirdly, read as many books as you can, fiction and non-fiction including children’s books because they are full of imagination and creativity.

Writing is not for the faint-hearted. People may have all kinds of comments about your book. Some may like your book and some may not but at the end of the day, if you have given your best shot, you will have that deep sense of satisfaction which nobody can take away from you. I don’t think it is possible to write a good book unless you have a compelling reason to do it and the urge to write is so strong that you can’t ignore it. Write the best you can. Get objective feedback on what you write. I would like to stress on the word “objective” here because not everyone is able to give feedback that is objective. Opinions of close friends and family members may not be the best candidates, though I know that some writers have family members who vet through their draft with hawk-like eyes and minds before it is sent to the publisher. We can do so much on our own but it’s difficult to see our limitations, we need others to help out. Having said that, it doesn’t mean that you have to listen to every piece of comment that comes your way. But if two or more people come back with the same comment, that’s when you have to listen. Be truly honest with yourself. Strong writing comes with plenty of practice.

I have been told that the strength of my book is in the stories that I tell. In fact, the stories took the longest to write and I wrote more stories than were included in the book. I have lost count how many times I rewrote them (at least seven or eight) before I decided they were “good enough”. The easiest to write, of course, was the first draft because this was when I just write whatever came to mind. It got progressively harder with each rewrite because I had to check on every word to see that it’s exactly the way I wanted to say it.

Aneeta: How can my readers contact you or read more about your work?

Jamilah: I have just started a new blog and here’s the link: coolmumsuperdad.blogspot.com

Aneeta: Jamilah, this is all I have to ask. Is there anything you’d like to add?

Jamilah: Writing a book is like working on a puzzle. You start with a question – something that you really care about and then look for the missing pieces and once you find them, you need to play around with them until they all fall together to form one big picture.

Aneeta: Once again, Jamilah, thank you.

Jamilah: You are most welcome.

Storyteller and Us – Interview with Arlene Uslander (16 November 2013)

Voice of a Storyteller – Interview with Terry Elston (2 March 2012)

History is a relentless master. It has no present, only the past rushing into the future. To try to hold fast is to be swept aside.
John F. Kennedy
Powered By: WordPress Quotes