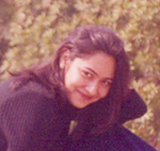 One of the very first newsletters I subscribed to when I ventured onto the internet scene was the one featured on WritersCrossing.com. Sadly, this newsletter is no longer in circulation. Nevertheless, I kept in touch with the owner of the newsletter and site, Mridu Khullar. I have observed her career from afar and been impressed with the enthusiasm she’s shown for her chosen craft, writing. I shall say no more lest I spoil the surprise; therefore, without further ado, I have great pleasure in introducing to you, Mridu Khullar …

Aneeta: Mridu, thank you very much for agreeing to this interview.

Mridu: Aneeta, thank you for featuring me.

Aneeta: O.K. Mridu, let’s start with some basic information. Where do you live and tell us something about your family and personal stuff you’d like to share with my readers.

Mridu: I’m 24 years old, live in New Delhi, India and have no cats. I spent four years of my childhood in London, which is where I developed my love for books, and wrote my first story. That story went on to catch the attention of several students and teachers, and eventually became our annual school play. That was my first brush with the craft, but for years, it remained the only thing I’d written.

Back in India, I wrote several more short stories and essays, mostly for class assignments but always found that they ended up being either performed or largely distributed. My teachers and friends often told me to consider a career in journalism, and when I’d reached a dead-end in my life, that’s the advice I fell back on.

Mridu: I’d always been interested in writing, but had never really considered it as a career option. The closest I came to getting formally educated in journalism was when I applied for a degree in mass media before I went to college. As it turns out, the results of the qualifying exam for engineering came out a day before I was to give the qualifying exam for journalism, and since I had my top choice of university for Information Technology, I said, heck, why not do that?

And then I failed my first year in engineering.

I started writing while I prepared for my semester exams, and was earning a full-time living with it by the time I finished college. I guess I was always meant to end up in journalism. Just took a few detours on the way.

Aneeta: On your website, http://www.mridukhullar.com/ it is stated that you’re an international freelance journalist with over 200 articles in print and on the Web. Now, I know that I tend to remember some of my favourite articles and there are some which I can’t even remember the title for. So, can you tell me, please, which three of your pieces do you remember most and why?

Mridu: Much of my favourite work is that which has affected me personally. For instance, after I failed my first year in engineering, I proposed an article on the topic to a college magazine. For that piece, I interviewed several people who had done extremely badly in college initially but had gone on to do some wonderful things like start businesses, become involved in social issues or just discover for themselves that one failure didn’t define them. It helped me overcome my own fears at the time.

In late 2005, I visited the coast of South India a year after the devastating tsunami of December 2004 and wrote about the issues that the people were still facing and my experiences while there. That is definitely one of my favourite pieces, not only because it gave me the satisfaction of doing work that would make a difference, but also in that it made me see why what I do is important and where I should be focusing my energies.

Currently, I’ve been writing a series of unrelated articles, through which I’ve been trying to understand how we, as people of different personal beliefs, communities and even nations, define independence. So I’ve examined the struggles of Indian women as they assert their identities, I’ve interviewed Tibetan refugees who have a very different independence struggle of their own, and for the remainder of the year, am hoping to observe smaller segments of societies to get their views on what independence means to them.

Aneeta: Tell me, please, what type of assignments do you prefer to undertake and why?

Mridu: Most of the work I’ve done so far has been of the how-to variety, for consumer publications in the fitness and technology arenas. But, and I suggest writers not follow my example, I did actually wake up one day and decide I was done writing articles that I wouldn’t read. So I refused thousands of dollars worth of work, finished up the current assignments on my desk, and decided to figure out where I wanted to take my career.

It was soon after this that I went to South India to visit the tsunami-affected areas, and that’s when I realized that I had in my hands the platform to give voice to people who don’t have one. And so far this year, that’s been my focus.

Aneeta: You and I have something in common in that we’re both based in Asia. Do you think that this is in any way a liability to a career in writing?

Mridu: Not at all! If anything, it’s an asset. We’re in Asia at a great point in history. The world is suddenly paying us a lot of attention. The western media is trying to do away with the worn out clichés of what Asia is and isn’t, and is instead trying to portray the realities and issues that are coming out of huge population. That, I believe, is great news for anyone in media. Especially freelancers.

Publications worldwide want stories in and about Asia. It’s tough to send journalists, especially freelancers for out-of-country assignments to places they’ve never been to and don’t know much about. We, on the other hand, are already here. We have the necessary contacts and knowledge to not only propose topics they wouldn’t have thought of, but can do it in a much more realistic fashion. Win-win!

Aneeta: As you know, my website caters for all manner of storytellers and storytelling. What is the importance of storytelling, if any, for a freelance writer who undertakes your kind of work?

Mridu: My work is nothing if not for storytelling. I’m telling stories, too, just that unlike fiction writers, I’m not making them up. They’re all true.

Aneeta: Mridu, how would an editor showing an interest in commissioning you to undertake an assignment contact you?

Mridu: E-mail works best, usually. I’m also your regular geek, so instant messaging is my favourite way of making contact. You can find several different ways of contacting me on my website http://www.mridukhullar.com

Aneeta: This is all I have to ask you. Is there anything you’d like to add?