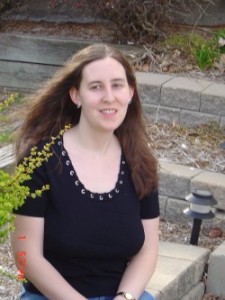 My guest today is award-winning author Christine Amsden, whose novel, Cassie Scot: ParaNormal Detective, has just been released by Twilight Times Books. Amsden has written stories since she was eight, always with a touch of the strange or unusual. She started writing seriously in 2003, after attending a boot camp with Orson Scott Card. She finished Touch of Fate shortly afterward, then penned The Immortality Virus, which has won two awards.

It’s great to have you here, Christine. Why don’t you start by telling us a bit about your latest book, and what inspired you to write it?

Cassie herself inspired me to write this book. She was someone whose story wasn’t being told – that of the powerless person in a world of magic. It’s a disability of sorts, one that affects her deeply though she tries to play it off. Yet she has value. Fantasy sometimes narrowly defines heroes as the biggest and the strongest, the one with the destiny to fulfill, but normal people can make a difference. That was important to me. This is not the story of someone who comes into power, it is the story of someone who discovers there is more than one kind of power.

Are you a full-time writer or do you have another job?

I am a writer, a mother, and I do freelance editing work.

How would you describe your creative process while writing this book? Was it stream-of-consciousness writing, or did you first write an outline?

I’m a planner, but that doesn’t mean the story doesn’t go its own way once I get started. In fact, my plans often require frequent adjustments as I learn new things about my characters and my world.

How long did it take you to write the book?

I don’t write books in a linear fashion, so it’s hard to say exactly. I wrote the first draft in four months. I spent another four months revising it. Then I wrote the rest of the series before coming back to rewrite the first one again. An agent gave me some specific advice on strengthening the first book, so I gave it one more revision, completing the version I sent to my publisher almost two years after I first came up with the idea.

Have you ever suffered from writer’s block?

Is there a writer out there who hasn’t? (If so, I officially hate him/her.) Writer’s block isn’t as big a deal as Hollywood likes to make it seem. It’s simply your subconscious telling you something isn’t right – maybe you didn’t do enough planning or research, or maybe there’s a plot problem, or maybe your character isn’t acting right. Whatever it is, I find that separating myself from the book for a little while (but thinking about it) usually uncovers the issue and allows me to press forward.

How was your experience in looking for a publisher? What words of advice would you offer those novice authors who are in search of one?

Looking for a publisher involves hitting your head against a brick wall repeatedly, and you can’t stop until you knock a hole in it.

I feel lucky, really. Twilight Times Books is a wonderful small press that offers a fair contract and has earned some respect.

The only advice I have to others is not to give up. In this day of self-publishing it is easier and easier to just put it out there yourself, but that is a long, lonely road. You worked hard on your book. Give it every chance it deserves.

What type of book promotion seems to work the best for you? Share with us some writing tips!

Virtual book tours have worked best for me. I no longer do in-person book signings because they sell so few books, and do so little to really spread the word. Most of my books are sold through the internet (whether print or ebook).

Book promotion, like finding a publisher, is like beating your head against a brick wall repeatedly. Getting through it starts with a quality product – a good story with eye-popping cover – then you just have to get out there and tell people about it. You have to keep telling people about it every chance you get, and if you don’t have any chances, you have to make some up.

What authors or type of books do you read for fun?

Do you think a critique group is essential for a writer?

No. I think critique groupS are essential for a writer. One mistake many authors make is to stick with the same critique group for far too long. You will stagnate this way. They can only tell you so much, and then you’ve figured out how to write for them, or you at least know precisely what they will say. When you get to this point, it is time to move on (although it is always good to keep in touch with friends and acquaintances, since you can help one another out in the future).

Do you have a website/blog where readers may learn more about you and your work?

Of course! My website is http://christineamsden.com/wordpress/, and I try to keep it up to date with my latest news and book releases. The site includes a blog with book reviews and writing tips. My contact information is listed, and I love to hear from readers!

Do you have another novel on the works? Would you like to tell readers about your current or future projects?

Always! Although I should start by mentioning that Cassie needed four books, all of which have been written and accepted for publication. The publishing schedule always gets a little off-track, but tentatively, the final book in the series will be available in the summer of 2014, a little more than a year after the first. In other words – they’re coming back to back to back, before you have a chance to forget everything that happened!

After that, I have a rough draft for a spin-off sequel, involving one of the minor characters in the Cassie Scot series who seemed to want a story of her own. I have set it aside for now to work on yet another fantasy series, this one involving a world of dreams. (I don’t want to say too much while it is still so raw.)

Find Christine Amsden on the Web: