Not again! I was tired and wanted sleep. Instead, I was staring out the window into the darkness. Then again, I’d become used to waking up in the middle of the night worrying about my father’s ailing health and our future.

I mentally ran through my checklist for when the inevitable happened: ask my cousin to drive me home; call my editor to reassign my interviews; make sure the car’s petrol tank was topped up.

What if I were overseas, though, when Daddy died? I must have enough money to buy a ticket home. I must arrange for someone to help Mummy call the doctor, report the matter to the police and do all the paperwork. Daddy had to be taken to the mortuary until I was home.

Such morbid thoughts, I know. However, I’ve learned that, in the dead of night, when worry and fear threatens to consume you, it’s best to be practical and think of all that needs to be done. This mental activity is exhausting and shuts out emotion; the body and mind eventually succumbs to sleep.

Today, I tell people that I lost my father two years before he actually died. He suffered a severe bout of pneumonia and was hospitalised for two weeks in November 2014. During those dark days, and in the following months, I bargained with God many times: Let Daddy come home and I will write ‘Bairava’ (one of Lord Shiva’s names) 22,000 times. Let him recover and I will turn vegetarian for 108 days. Let him live longer and I will recite the Mahamrityunjaya mantra 108 times for 48 days. Although Daddy pulled through and was discharged on his birthday, November 23, he was never the same.

Two things happened in the last six months which made me anxious. The first was when our maid telephoned one morning and said: “You call your father. He is crying all morning.” Apparently, Daddy realised that for the two weeks I’d been home, he couldn’t remember who I was because of his dementia. He tortured himself assuming I was upset. I wasn’t. But that’s the moment I began to hurt because he was enduring such intense emotional pain.

The second was based on what Carla Wills-Brandon once wrote: ‘The dying will report visions of angels, deceased loved ones, or religious figures, moments, hours, days or even weeks, before actual death takes place.’ (http://www.care-givers.com/DBArticles/pages/viewarticle.php?id=138)

In April, when Daddy woke up one morning to tell us about the ‘people’ seated at the end of his bed, I didn’t argue. Instead, I went into his bedroom and said to ‘them’: “It’s OK. You all sit there and keep Daddy safe. No need for you all to hurry.”

One evening early last month, when I was helping him get ready for bed, Daddy asked me, point blank: “Who are you?” He no longer knew me, but he could name his childhood playmate and my grandfather, whom he saw standing in front of him the next morning.

When my father was placed on life support on 12 October, I didn’t dare bargain with God anymore. A miracle had already taken place: I’d fulfilled Daddy’s wish and brought him back from Kuala Lumpur to Alor Setar. He was so frail that I feared he would die in the airport. But, like magic, everything fell into place.

I knew that any medical intervention at this stage might keep him alive, but could have rendered him bedridden. Many times, Daddy had said that he preferred to die before this happened. So, I steeled my nerves, let go of my selfish desire to keep my father alive at any cost and silenced the voice of my sorrow. My task was not merely to let my 86-year-old father go, but to help him let us go as well. 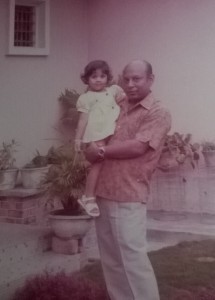 I turned to friends and explained that for the last two years, my father had become a ‘child’. I became his ‘parent’ and cared for and loved him. Now, as the finality of what was going to happen fast approached, I was worried. Would he be safe? Would he be cared for? I asked that they pray for me to have the strength to go through one of the hardest things ever. How kind they all were, regardless of colour, creed and faith: Catholics said the Rosary, Christians prayed and Hindus recited the mantras with me.

I can count on one hand the number of people I informed about Daddy’s condition. Yet word spread fast. Uncles, aunts and many friends dropped everything and rushed to be with us. The makcik who sat next to me on the plane during a quick dash to Kuala Lumpur to shut down my flat comforted me as I wept. People I’d interviewed sent flowers, cards and messages.

Finally, on the morning of October 17, when there was no longer any cognitive function and Daddy was slipping away, we gathered by his side.

At one stage, I whispered into my father’s ears. “Daddy, if you can see, look around you. I’m here. Mummy is here…” and I continued to name all the people standing around his bed. I imagined that, like in the movies, Daddy’s astral being would rise up and see us all.

“Daddy, pray to Amma,” I urged him. This word ‘Amma’ had a double meaning. For one, Amma was his ishtadevam (a worshipper’s favourite deity in Hinduism). It was also what we called my grandmother. Daddy opened his eyes and glanced at all of us. It was the validation I needed that Daddy had heard me and knew that he wasn’t alone. When my father then closed his eyes for eternity, I surrendered his body, heart and soul into Amma’s hands.

I choose to believe that in those last five days of his life, Daddy came back to us. Although physically helpless, he recognised us and communicated in other ways. He smiled when I promised to look after Mummy. He squeezed my hand when I asked for his forgiveness for all the wrong I’d done. Tears fell from his eyes when I thanked him for giving me the pleasure of being his daughter. When I told him it was time to rest, he gave me a firm nod.

As Mummy and I get used to a new reality and I tell people about the perfection of my father’s death, I shed no tears. What right have I to cry when the entire sequence of events was a testament that my every wish was granted? Daddy died peacefully surrounded by the people who loved him, and in a town where he’d earned enormous respect.

I end this story with the same request every time: Please say a prayer for the repose of the soul belonging to Dr. Rajah Sundararaj, a man whose name I am deeply honoured to carry.

Old friends pass away, new friends appear. It is just like the days. An old day passes, a new day arrives. The important thing is to make it meaningful: a meaningful friend - or a meaningful day.
Dalai Lama
Powered By: WordPress Quotes