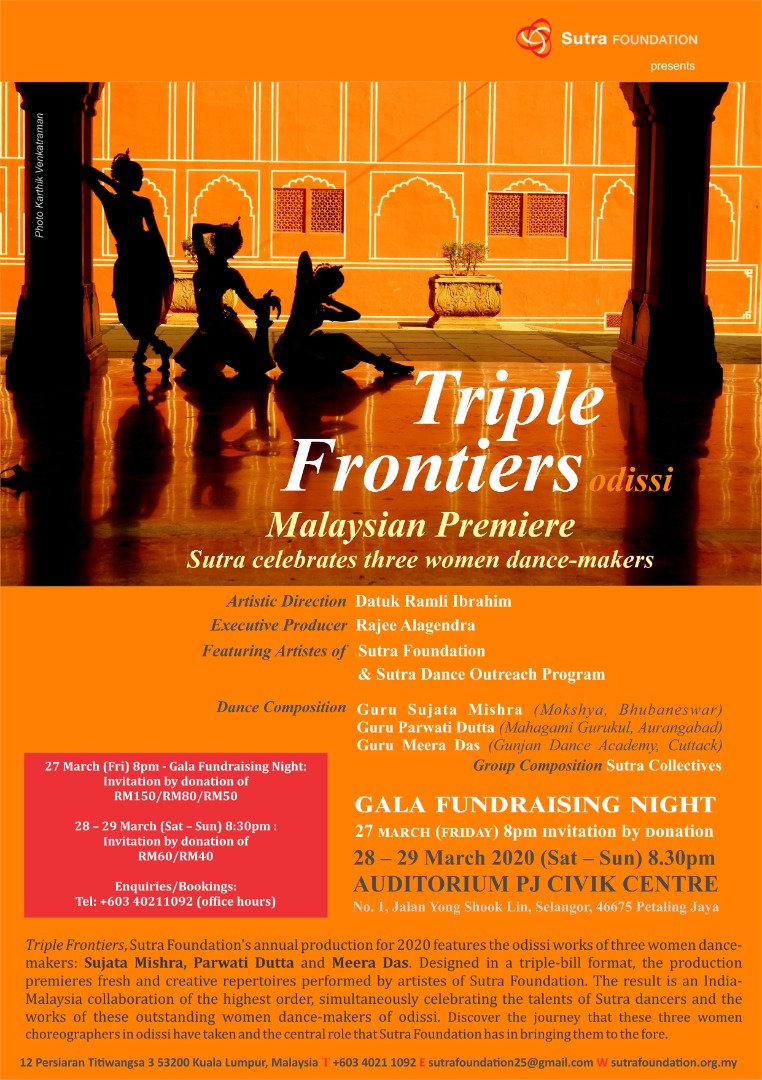 [This story is published here with the author’s permission.]

In April 2011, Sutra Foundation staged Odissi Stirred at the Kuala Lumpur Performing Arts Centre. The newspapers reported that, ‘true to the art, the choreographer is inspired by the Odissi tradition and reveals its rural and folk charm, incorporating elements of its originality while transcending into modernity as the moves are mesmerisingly surreal and captivating.’

The production included a 20-minute composition commissioned by Sutra called Pallavan which was choreographed by Madhavi Mudgal. She performed it alongside Evocations by Sharmila Biswas.

Many were unaware that this was the beginning of a paradigm shift. It was the first time that Malaysians saw odissi choreographed by women. Indeed, the word ‘choreography’ was either not understood or taken for granted.

For a long while, the gurus and dance-makers of odissi tended to be male. Generally, male dancers learn odissi in order to become gurus; not many can compete with the women as dancers. Performing the standard solo repertoire of odissi, the women dancers were always the ‘par excellence’ interpretive vehicles of lyrical odissi, but hardly ever ventured into the realm of dance making in odissi. Until now.

PUSHING BOUNDARIES
The importance of this development in the evolution of odissi can fully be appreciated when one understands these dance-makers’ journeys thus far. Over the last five decades or so, they have steadily pushed the boundaries and ventured into new frontiers.

In the late 1970s, very few Malaysians were exposed to odissi works. Those who were lucky enough, might have seen the spellbinding odissi performance of Dasavatar by Chandrabhanu when he first danced the powerful depiction of the ten incarnations of Krishna.

However, it was through Sutra that the larger population of Malaysia became familiar with this exquisite Indian classical dance form from East India, which was based on the methodology of one of the three pioneer giants of odissi, Guru Debaprasad Das. The other two were Gurus Pankaj Charan and Kelucharan Mahapatra.

The creative spectre of these three pioneer giants of odissi loomed large, such that few repertoires from their disciples would emerge and survive within the shadow of their genius. Their disciples, in the capacity of novice gurus and dance-makers, either did not want to or were unable to challenge the supremacy of their masters. In Odisha, experiments were usually met with vehement resistance.

By the time the three pioneer gurus were no more, odissi has already consolidated its methodology of teaching. With the popularity of odissi world-wide, the new dancers-gurus also began to travel internationally and make their presence felt. Still, they were all mainly male whose focus was often teaching.

QUANTUM LEAP
Then came the quantum leap when a fresh and innovative repertoire from the younger gurus came of age. For example, Durga Charan Ranbir, Gajendra Kumar Panda, Bichitrananda Swain and Ratikant Mahapatra are among many male gurus who have been taking the creative mettle of creating new works. Aruna Mohanty exercised her creative talents and established herself as a dance-maker and director of import when she took over the helm of Odissi Dance Academy.

Simultaneously, a fresh ‘branding’ of odissi dance and music was being established here in Malaysia. Soon after Debaprasad Das passed on, Sutra’s relationship with this parampara progressed into another phase. We commissioned several benchmark new repertoires from Guru Gajendra Kumar Panda, arguably Debaprasad Das’s closest disciple and performed them in Odisha, thereby creating a sensation.

The next stage came about when Sutra enlisted the creative input of Guru Durga Charan Ranbir, another senior disciple of Debaprasad Das. We commissioned a number of strong works that further extended Sutra’s foray into this rare parampara.

In the process, Sutra’s distinctive and innovative group compositions have influenced internationally how odissi is viewed in a large theatre and outdoor performing spaces. These have set us apart from others as a brand which is both unique and cannot be replicated, as yet. Therein lies the ‘Sutra Factor’.

Within 35 years of odissi being first performed under the banner of Sutra, it became a favourite Indian classical dance performed frequently on stage both with local and overseas dancers. It also became a favourite with audiences, placing it on par with the more established bharatanatyam

ULTIMATE GIFT
Enter into the picture in early 1990s, Sujata Mishra, Parwati Dutta and Meera Das. Today, they run their own successful dance institutions in India and have dedicated at least three to four decades of their lives to odissi. They represent the two major paramparas of the late Debaprasad Das and Kelucharan Mahapatra.

At the start of their careers as exceptionally gifted dancers, they were singled out by their gurus in the guru-sishya parampara tradition. They absorbed the style of their mentors, grew into the mould of their pioneering gurus and subsequently become teachers of odissi in their own right, imparting their hard-earned knowledge to their young students. Soon, they found that they were embarking on the less-charted territory of choreography and eventually contributing their own colours and hues to the creative fabric of the odissi parampara that had cultivated them.

Sutra contributes its inimitable mark in Triple Frontiers to the works by these three women choreographers. Sujata, Parwati and Meera personally taught the senior Sutra dancers under my mentorship. Having learnt the repertoire as a solo form, the works now face another round of transformation as they are interpreted as group compositions (with permission of the three dance-makers). In order that all of Sutra’s talented dancers are featured in this new repertoire, more than 16 of its 24 dancers on stage will comprise of the young dancers from Sutra’s Outreach Programme.

The result is an India-Malaysia collaboration of the highest order which simultaneously celebrates the talents of the Sutra dancers and the works of these outstanding dance-makers of odissi. Triple Frontiers is ultimately a gift by Sujata, Parwati and Meera.

Anyone who stops learning is old, whether at twenty or eighty. Anyone who keeps learning stays young. The greatest thing in life is to keep your mind young.
Henry Ford
Powered By: WordPress Quotes