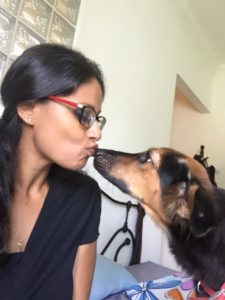 Rescuers (who are also sometimes active feeders) first spotted the dumped dog in March 2018 in Klang, about 30km south of Kuala Lumpur. She was estimated at around four months old and had been seen wandering around alone and frightened. Most street puppies that age still have that puppy innocence in their eyes. But not the dumped dog. She was most certainly an old soul. 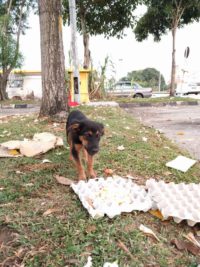 Rescuers continued feeding the dumped dog every day in an effort to not only keep her alive but to eventually gain her trust so that their eventual ‘catching’ would be a smooth process for both the catcher and the dog. And because street pups tend to come and go on their own schedule, assigning the right time for the catcher to be present is a constant work in progress.

Nevertheless, getting the dumped dog off the streets was not just an exercise in animal rescue, it was also a case of life and death. Despite being recognised yet undisturbed by daily passers-by at her usual Shell petrol station in Klang, it was only a matter of time before freedom ran out. If Duchess was caught by the town-council assigned third-party street dog catchers, she would become another statistic on a report card of death row dogs. Nonetheless, with the help of an experienced ‘independent dog catcher’, she was ‘caught’ and promptly transported to the vet for a check-up. The vet kept her in his boarding area until we arrived. 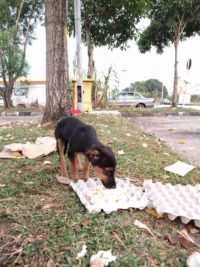 When it comes to humans, dogs need two vital connections – love and trust. A dog that experiences the lack of both connections with humans, it can take a long time to develop them again. Dog-catching is one activity that if done without these connections, will leave long-lasting negative effects. All it takes is one bad experience. She experienced several consecutive traumatic human connections – life as a street dog, her misunderstood-catching, emotionally detached vet attendants – and these are only the ones we know of. This is where The ‘ALIVE’ Project came in.

The rescuers had asked us to foster the dumped dog under our sponsorship programme. We agreed and went to the vets. As David followed the vet attendant into the boarding area, his heart broke a little when he saw the dumped dog. There were cages of dogs stacked one on top of the other. Dogs in the lower cages were drenched in the piss of the dogs in the upper cages. All of them were cowering and barking in this unfamiliar territory. The vet attendants were cold, flippant and more interested in the furry poodles that were, no doubt, paying customers.

“It’s ok, you’re coming home with us,” he whispered in the ears of the dumped dog as he carried her out the cage. In that short journey to the car parked outside, the puppy pissed all over him. I often wonder if this was in fear or relief.

That evening we named the dumped dog. She was graceful, soft and fluid in her movements, a street dog that seemed like she belonged in a castle, like a duchess. That was it. Her name would henceforth be ‘Duchess’.

Much damage, however, was already done. Duchess refused to come close, never allowing us to touch her. She seemed eager and curious, but her eyes displayed deep-rooted mistrust. So we gave her some space and watched as she was welcomed warmly by the pack at home, who provided that added assurance that she was in a safe place.

It was wonderful to witness what was happening. Duchess soon discovered what it felt like to be the one protected and watched over, the one who didn’t have to be ‘big sister’ because Christmas, one of our rescues who is also our self-appointed farm perimeter ‘watchdog’ took Duchess under her paw. Duchess became her ‘little sister’ and accompanied Christmas, taking long walks around the outskirts of our acre, looking out for unwelcome visitors and, most annoying of all to Christmas, cows and buffaloes who grazed around our farm. Slowly, Duchess’s eyese got softer by the day and her body language went from jumpy and startled to alert and observant.

I could sense their thoughts. I’ll get to know these humans soon enough.  And Christmas would respond, They just want to love us. Duchess would give one wag of her tail. I’d like that. 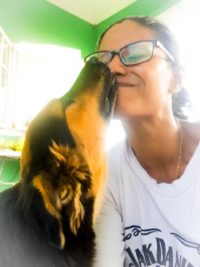 You see, Duchess and I had something going. Every time I gazed into her eyes and whispered her name, they sparkled. She took one step closer. Only one. “Trust me, Duchess. I got you,” I would say each time. This continued until, one day, we were close enough and she licked my nose. I picked her up and took her to have her first bath together.

I’ve learnt to say her name in a particular way. It’s not a whisper,  I whispered her name again, in the way that she loves that makes her run to me and kiss me and beg to be cuddled, and she looked at me with those deep dark eyes as if to say, Please love me like I will ALWAYS love you. I knew that she knew she was indeed finally home.

Now that she looks forward to a happy life, the quirky side of her has emerged. You can’t simply say, “Duchess,” to get a response. Sure, she’ll come to you. But, to get that look of love, you need to do a little more. You need to say her name in a forced whisper that sounds like Macy Gray and lengthen the ‘hessssss’; so, it goes like this: “Duchessssssssssssssss.” Once is enough. She’ll melt for she understands that yours is a whisper of love.

The man who trims himself to suit everybody will soon whittle himself away.
Charles Schwab
Powered By: WordPress Quotes