Sometime last week, I received an email from a lady I interviewed sometime ago, Ruth Barringham. She mentioned a new resource and I followed the link to one page which led to another, then another and before I knew it, I was on Nick’s site. I found much of what he said of interest and asked him if he would agree to be interviewed and he agreed. It is an interesting interview and without further ado, I have great pleasure in introducing to you Nick Daws …

Aneeta: Nick, thank you for agreeing to this interview.

Nick: Hello, Aneeta. Thank you for inviting me.

Nick: I live in Burntwood, Staffordshire, England. It’s a small town not far from Birmingham, England’s second city. I live with Jayne, my partner for almost 20 years. Jayne teaches IT to adults at two local colleges. We don’t have children, but we do have two cats, Ronnie and Reggie!

As regards my writing, I am the author of over 40 non-fiction books, including Living & Working in Germany, Living & Working in Italy, Stress-Busting, Start Your Own Home-Based Business, Advertising for the Small Business, The Internet for Writers, and many more. I have also written several full-length training courses, mainly on writing and editing, but also about business-related topics. I have written innumerable articles and other short items, and am an award-winning short story writer. My work has also been broadcast on TV and radio.

Aneeta: Before you became a freelance writer, what did you do?

Nick: I had a variety of jobs, including youth work, teaching, and counselling. My last job before I became a full-time freelance writer was as Information Officer for a national charity.

Aneeta: How did you get into writing?

Nick: As far as I can remember, I’ve always been interested in writing. But I suppose if you twist my arm, I remember when I was about eight or nine co-writing a “novel” in an exercise book with my then best friend, Timothy Nesbitt (where is he now, I wonder?). Even at that age I got a real kick out of doing this, and my teacher must have been impressed as well, as she let us work on the book when we should have been doing other things instead. Maybe that was the point when I first realised the attractions of being a writer.

But if you mean how did I become a full-time freelance writer, that arose from a situation that occurred in my last job, when I was working for the national charity. The top job in the organisation became vacant, and despite some misgivings I was persuaded to apply. I didn’t get the job, but the woman who did made it very clear that she saw no place for a rival in the office. I would have been OK working with her, but she did everything she could to undermine me. From being basically an enjoyable job, it became a test of endurance, and it reached a point where I’d simply had enough. So I decided to take the plunge, hand in my notice, and become a full-time writer.

As it happened, she probably did me a big favour, as without that incentive I don’t know I would ever have been brave enough to take the leap. It took a while to establish myself as a freelance – I certainly wasn’t an overnight success – but now I think it’s the best thing I ever did.

Aneeta: Now, I know from your homepage, you have done a tremendous amount of writing. It is stated there that you have published “over 40 books, seven correspondence courses, four multimedia tutorials and numerous published articles and short stories”. I do not think it will be possible to go through each one of these resources. What I propose to do is talk about those which look most interesting for storytellers, and people can of course look on your website at http://www.nickdaws.co.uk/ for information about the others. Can we start with your CD course “Write Any Book in Under 28 Days”?

Nick:Certainly. “Write Any Book in Under 28 Days” is my writing course on CD-ROM. It’s aimed at anyone who would like to write a full-length book, fiction or non-fiction, in the shortest possible time.

At the heart of the course is my unique five-step method of outlining and blueprinting. This is the method I have used to write many of my own books, and it has also been used successfully by thousands of students of the course across the world. You can see just a few of the many unsolicited testimonials my publishers have received at http://www.writequickly.com/author/testimonials.aspx.

“Write Any Book in Under 28 Days” contains a lot more than just the five-step method, though. I’ve also crammed it with hints and tips on writing professionally, based on my many years working as a writer. It’s not just the usual bland stuff you’ll read in most writing books and magazines either. I’ve been making my living as a writer for nearly twenty years now, and I really do know what works and what doesn’t.

If any of your readers would like more information about “Write Any Book in Under 28 Days”, they may like to check out this page on my website – http://www.nickdaws.co.uk/writeany.htm – where I have posted much more information and also an extract from the course.

Aneeta:Many thanks for that, Nick. And how about your other course, “Quick Cash Writing”? Is that on CD-ROM too? 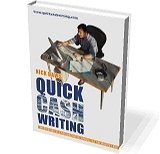 Nick: No, “Quick Cash Writing” is available as an instant download, although it’s from the same publishers, WCCL.

QCW covers a wide range of shorter paying outlets for writers. It starts with two of the easiest ways to break into publication, writing readers’ letters and fillers. It goes on to cover a huge range of other markets, some well known such as article-writing, others lesser known, including devising greeting card ideas and selling ideas for TV shows and movies.

Aneeta, I know your readers are mainly interested in fiction writing, so I should perhaps say that QCW also has modules devoted to writing short stories (a particular interest of mine) and short comedy material (TV and radio show sketches). And, as I mentioned above, there is a module about devising and selling ideas for TV shows and movies, which can be hugely lucrative if you can come up with a strong, original concept. Again, you can see more information about Quick Cash Writing at http://www.nickdaws.co.uk/qcw.htm.

Aneeta: I’m envious of you, Nick. You have a successful Forum, My Writers Circle. I tried to create one and this project had to be aborted in its infancy. Anyway, tell me a little more about this forum. How did it come about and what is its purpose?

Nick: The forum, at http://www.mywriterscircle.com/, is a joint project between me and my publishers, WCCL. WCCL publish a growing range of resources for writers – not only my courses! – and they felt that a forum would help them raise their profile by supplying a valuable service to the international writing community. They designed the site and provide technical support, but they needed a writer to bring it to fruition. As I’ve been working closely with them for several years, they asked me first, and I was delighted to accept their invitation. I have very much enjoyed collaborating with WCCL in developing, implementing and running the forum.

Mywriterscircle is a free service. It doesn’t make any money directly for me or WCCL, but of course it helps raise both our profiles. And there are other benefits as well. For example, I’ve used the forum several times to find other writers to collaborate with or take on projects I’m too busy to handle myself. It’s also a great research resource: with almost 3000 members, there’s nearly always someone who can answer any query you might have. And finally, I’d like to think I’ve made a lot of new friends via the forum.

Incidentally, I would like to invite every reader of this interview to sign up as a member of Mywriterscircle. You are assured of a very warm welcome, from me and all the other members of the forum.

Aneeta: Of all the services you offer like business writing, consultancy, fiction writing and so on, the one that intrigued me most was ‘Writing Tuition’. Nick, what does this mean and what do you do?

Nick: Ah yes! I’ve always enjoyed working with new writers and passing on my skills and experiences. For many years I was a tutor and external examiner for The Writers Bureau, the UK’s leading distance learning college for writers. I also taught creative writing classes in adult education for several years, though that isn’t something I’m doing at the moment.

I also pass on my knowledge in other ways, including speaking at conferences, running workshops and seminars, and with my courses such as “Write Any Book in Under 28 Days” and “Quick Cash Writing”. I love being invited to writers’ conferences and such like, though, so if anyone is currently organising such an event and needs a guest speaker or a workshop leader, my rates are very reasonable!

Nick: You’ve probably heard this before, but my top advice is to write in scenes portrayed through the eyes of a single viewpoint character. This helps the reader to immerse him- or herself in the story, and identify with the character concerned.

The other thing I’d say is don’t be too quickly satisfied with your plot ideas. The first idea that comes to you is very unlikely to be original. Instead, play with your ideas a bit, look for double-twists rather than simple twist-endings, turn your readers’ expectations on their head. Doing this will give your stories a unique slant, and really make them stand out from the rest.

Aneeta: Nick, I have come to the end of my series of questions. Is there anything you’d like to add?

Nick: I’d just like to recommend a couple more of my websites for your readers to check out. First of all, please do visit my blog at http://www.mywritingblog.com/. I regularly post items of interest for writers here, including reviews of new products, useful websites, special offers from my publishers, snippets of writing advice, and so on. If you’re interested, you can even read one of my short stories on my blog! Here’s the URL for it: http://www.mywritingblog.com/writer/2006/03/competition.html. Incidentally, it’s a mystery story, and you can read the solution in another post I made a week later.

And, of course, there’s my homepage at http://www.nickdaws.co.uk/. Some of this is just background information about me, which may not be terribly exciting, but you can also subscribe to my free e-mail newsletter, E-Writer, from the link in the main menu.

Nick: It was my pleasure, Aneeta.