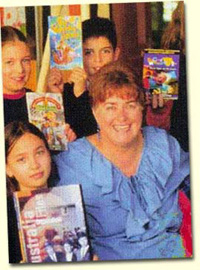 Di Bates wrote to me several weeks ago to place an announcement in the ‘Tell Everyone About …’ section of my newsletter. I continued corresponding with her and when she asked if she could be interviewed, I was more than happy to oblige. She has a very interesting personal history and one of the few people I know who can boast about having had more than 80 books published. Without further ado, I have great pleasure in introducing to you, Di Bates …

Aneeta: Di, thank you for writing to me and saying that you’d like to be interviewed.

Di: Thanks for agreeing to the interview!

Aneeta: I’ve read some of the stories about your early childhood on your website, http://www.enterprisingwords.com/ . For the benefit of my readers, I’d appreciate it if you could share with us parts of that story – for instance, tell me where you were born, where you went to school and college.

Di: Born inSydney, Australia, I was raised on a farm where I worked hard with my sister raising chickens, pigs and goats while our father drove trucks interstate. When I was 11 my hitherto unknown half-brother arrived from theUK and helped us manage the farm for a while before arguing with our father and disappearing. We were told he’d been killed, but he turned up years later, a great surprise, as you can imagine! In my third year of high school, I was fortunate in winning a scholarship: this enabled me to finish my final two years. I was then awarded a teachers’ college scholarship and thus became the first person in my working-class family to go on to tertiary studies.

Aneeta: I read about how you did not try to write well for a long time after other students in the two-teacher school you went to thought you’d copied the story you’d written about your ideal home. This, then, begs the question: what is the best way to encourage children to write and tell stories?

Di: There is no rhyme or reason why a person becomes a storyteller: I was never read to or encouraged to read. I was deeply unhappy as a child – my father was an abusive man – so I had a rich fantasy life wherein I imagined I was adopted and had a ‘real’ family elsewhere. I was always creating fantasy worlds in my mind and on paper where I was happy and wanted. Other authors I know tell of being read to when they were young and having parents who told them family stories. I think in the end it depends on the child as to whether or not they will write and tell stories, but no doubt it helps to have access to books and to adults who help to stimulate the imagination.

Aneeta: Now I know that you are an author of over 100 books now. My question is, when did you first become a published author? What was the book about?

Di: I was approaching my thirtieth birthday when I realised I hadn’t achieved much in my life, so I resolved that I would write a book. Fortunately I had been seconded as a teacher to a state-wide children’s magazine so I’d become interested in writing for children. Prior to that, I had written stage plays for students I taught, so that’s really where I’d started. I wrote my first book while living in an isolated property on a mountain. I had met a girl who was ‘shared’ by her parents: for half of each year she lived on this mountain with her father who was an actor; for the other six months she lived in the city with her mother. I was intrigued by her lifestyle and so wrote my version. This book, Terri, was published by Penguin Books as one of Australia’s first Puffin novels for children.

Aneeta: With over a hundred books, it’s impossible for me to list them all. Therefore, I shall ask you to tell me about three of your favourite ones.

Di: I have three as yet unpublished books which I favour. In the Dog-House is a picture book text which has domestic violence as its theme, although there is no violence per se in it. To my knowledge there has never been a picture book published on this subject. Recently I despatched my first verse novel, a junior book titled Nobody’s Boy, to a publisher. It is told from the point of view of a boy who is fostered, and is based on my experience of being a foster mother. Finally, there is Aussie Kid Heroes, a non-fiction book which will be published in 2009 (Interactive Publications). For decades I have been passionate about the achievements of children, fifteen years and under, who have performed remarkable feats – written books, saved lives, been national ambassadors, inventors, explorers, and so on. I have actually compiled six books on this theme. Aussie Kid Heroes was accepted by the 33rd publisher to whom I submitted it. I expect kids will love this book as much as I do, and hopefully they will demand more. I have stories from children from all countries of the world: kids whose stories demand to be told!

Aneeta: Tell me about your latest book, Crossing the Line (Ford Street). What is it about?

Di: Sophie, the book’s protagonist, has a history of abandonment, having been orphaned and fostered time and again. At the start of the story she is entering independent accommodation with two other teenagers. Privately, she cuts herself when there is stress in her life, though she does not reveal this to her doctor. He, however, becomes concerned about her and admits her to a hospital where she comes under the care of a psychiatrist with whom she forms a strong attachment. This doctor crosses the patient-therapist line, but so too does Sophie who becomes obsessed with her, even to the point of stalking. In writing this book I have drawn on my own experiences. As a teenager I self-harmed. I have also had stints in hospital as a patient with bipolar disorder.

Aneeta: There is one aspect of your Writers Career Consultancy that I would like to focus on which is Publishing Truths. Can you please share three home truths about the publishing industry?

Di: In a writing module I offer to new children’s writers through my website www.enterprisingwords.com I reveal a number of publishing statistics which give some idea of how difficult it is to break into the industry. Here are a few:

I offer these truths to show how important it is for writers to be aware that it is not a matter of just writing a manuscript: you need to be absolutely single-minded. And professional. And persistent.

Aneeta: I was intrigued by one of your your industry ambitions – to redress the lack of rights for children inAustralia. I studied in Australia for a few years and as far as I remember, Australian children seemed to have it pretty good. So, I’m curious, what rights are you looking at specifically?

Di: Australia still has no national charter of rights for children, nothing that legally standardises how adults shall treat children and what rights a child has in relation to the law. This allows abusive parents to move their children around the country at whim. Even within the state where I live – NSW – the departmental body responsible for the care of abused children is so under-resourced that child deaths can and do occur, even when there have been multiple notifications of abuse from concerned adults – doctors, relatives, teachers, neighbours. Yes, superficially children appear to do well in our ‘civilised’ country, but under the surface they are vulnerable. The law needs to be changed, resources need to be greatly increased.

Aneeta: I understand you also run a website and an online magazine called Buzz Words – http://www.buzzwordsmagazine.com. Tell me a little about your aim in setting up this website and ezine.

Di: As an author who lives regionally, I am geographically isolated from publishers and most other writers. To help me keep in touch with what is happening in my industry I began in June 2006 compiling Buzz Words (The Latest Buzz on Children’s Books), a fortnighly online magazine which now attracts hundreds of subscribers, mostly writers, authors, editors, librarians and publishers. Buzz Words is as up-to-date as I can make it, with writing for children markets, competitions, opportunities, festivals, workshops, interviews, book reviews, industry information and so on – 50 pages delivered on the 1st and 15th of every month. There is also a bimonthly book review supplement, Books Buzz. In the past 12 months we have reviewed over 700 children’s books, more probably than any other review magazine in Australia.

Aneeta: As you know this website caters for storytellers. What advice would you give those who’d like to venture into storytelling?

Di: To succeed in any industry, is to first of all open yourself up for failure, so you need to be courageous. You will never get it 100% right the first time, if ever, but through trying you will learn. Start small and start with supportive people around you. Keep practising, keep presenting. I was once very timid about speaking in public. I joined a speaking club and was a spectacular failure on my first attempt. However, my colleagues were kind and encouraging. Now, years later and with many speeches behind me, I have no fear when I address audiences of hundreds. On my office wall is a reminder which I hope helps your storyteller friends and colleagues: associate with the kind of people you want to become. Immerse yourself in storytelling. Persist. You will succeed!

Wondermental Rights – interview with Chandrika (7 May 2009)