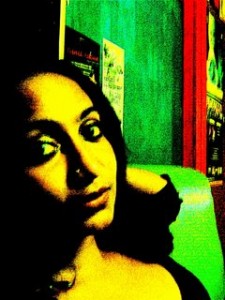 When I first published The Banana Leaf Men, Sharanya’s request for an interview came hot on the heels of a nasty encounter with another journalist. Needless to say, I was somewhat reluctant to meet Sharanya at all. Still, I acquiesced and prepared for the interview. I expected to meet an ‘old’ lady and was on guard. When this young, beautiful girl with unbelievably long hair turned up, I was a little taken aback.. With her friendly manner, we soon got talking and that interview was a happy memory for me. Since that first meeting, we’ve become friends and I’ve come to admire her work. When she told me about her newest piece of work, Iyari, I thought it only appropriate that I should request an interview. I asked, she agreed. Without further ado, I have great pleasure in introducing to you Sharanya Manivannan …

Aneeta: Sharanya, thank you for agreeing to this interview.

Sharanya: My pleasure, Aneeta! Why on earth wouldn’t I?

Sharanya: For now, I live right here in Kuala Lumpur. I was born in India in 1985, lived in Sri Lanka till age 5 (how I came to be born in India when my family lived in Colombo is a story for another time), after which we moved here to Malaysia. I was, in most ways, raised by my maternal grandparents, Sri Lankan Tamils. I’m Chennai Tamil on my father’s side. And yes – there is a difference! The Ceylonese is my overriding ethnic and familial affiliation; my Indian side manifests itself in different ways, and I continue to maintain with pride my Indian nationality despite the bureaucratic heartaches it involves. A great deal of my poetry, in particular, deals with my sense of exile, my negotiating with my roots and the mother tongue I abandoned in childhood only to have it, in more recent years, wrestle me to my senses so I could see my own immense love for it, and regret my earlier rejection of it.

Aneeta: Now, on your blog, http://www.sharanyamanivannan.wordpress.com , it is stated that you’re a writer, dancer, painter, actress, photographer, journalist and activist. I’m so tempted to ask, is there anything you don’t do? Anyway, do tell me a little about each of these ‘vocations’ of yours.

Sharanya: I don’t cook, at least not as well as I would like, and neither can I swim! The thing about my many ‘vocations’ is that I am audacious enough to declare myself to be all of those roles simply by virtue of my passion and pursuit of them. I don’t see why I shouldn’t. I write, I am a Bharatnatyam dancer, I do oil painting, theatre, photography, and have earned my daily bread in journalism and activism. I am deeply, deeply in love with each of these, and some I have fared better at by public standards than others. Nevertheless, I think that’s where it starts – without the ego, without knowing what personas you want to project, it’s impossible to be taken seriously. One does what one does for herself – one talks about what one does for the sake of other people. A huge part of my passion comes from the charge I get when sharing my work. That “godly feeling”, as my friend the theatre director Kelvin Wong calls it.

Aneeta: I understand from your most recent email to me that your chapbook of poems, Iyari, is now available. Tell me about this work. 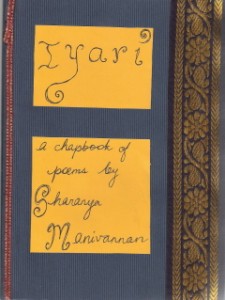 Sharanya : Iyari was really one of those “right moment” decisions. My friend Jasmine Low and her partner obtained a shop outlet for a brief period of time which they decided to turn into the Indie Scene Café – it’ll be in Piccolo Galleria, Bukit Bintang, until December 31st, and will hopefully subsequently pop up in other locations. When she told me that she wanted independent artists to sell their DIY material – books, paintings, CDs, etc – for some reason, I became excited enough to decide to publish a chapbook. Now that it’s all been done, I’m not entirely sure why I made the decision in the first place, because I’d been notoriously possessive of hard copies of my work thanks to unpleasant experiences in the past, but I am so grateful I did. Iyari is a 44-page chapbook of poems, and I painstakingly worked on every single aspect of each and every copy – from page layout to photocopying to cutting and pasting the cover together. I hope my personal touch is clear in every copy. “Iyari” is the Huichol Indian concept of “heartmemory”, in which I believe our deepest and most profound truths are rooted. I should add that my chapbook is not in lieu of a complete manuscript of poems. It’s mainly to garner interest in a longer book-length manuscript, which I hope to have ready in the very near future. It was just the right time for Iyari, somehow.

Aneeta: I read also that you’re working on your first novel. What is it about?

Sharanya: My novel is called Constellation of Scars. Let that be known – because I’m terrified that someone will rip it off me! I’ve included the title in my chapbook, in the perhaps naïve hope that people will back off because they know there’s this person working with it already. There, it’s out there now! It’s a novel about memory, love, loss, longing – all the usuals. All I can tell you at this point is that it is set in Singapore and Sri Lanka, and revolves around a young photographer who is obsessed with the preservation of transitory moments, because so much of her own history is in darkness to her.

Aneeta: In all of this, I know that you’re a student as well. What are you studying?

Sharanya: I’m no longer a student, actually. I’m entirely tired of college. I finished school at 15 and spent the years between then and now being bandied back and forth. Ironically enough, this was despite my own hard work and because of the irresponsible decisions and indecisions of others.

Sharanya : Make your own opportunities. Go out there and do it. I have performed at every reading I could in the last five years, self-published my own chapbook, contacted writers I had never met in an effort to establish networks. Fairytales of being plucked from obscurity rarely translate to reality. Being a storyteller, I think, is a divine vocation – I feel very strongly that I was put here to tell certain stories, that they are given to me by blessing, whatever the medium I excavate and then indulge these stories in. I feel this in my iyari. But, there is a time and a place when you must set aside that godly feeling that surely engulfs and intoxicates you, as it does me, when you write or perform or otherwise create or share your story, your stories. There are times and places where you must regard your work as being like any other job, and push for it likewise. Don’t be afraid to build your own opportunities. If you don’t believe in your work, if you are not willing to be vulnerable in sharing it, then you cannot expect anyone else to respond to you. And on that note, community is so important – the solidarity offered in finding the right group of writers with whom to have discussions, organise events and writing sessions, get critiques from, just shoot off an email to when you’ve got a great passage or poem down, is powerful.

Aneeta: Sharanya , I have come to the end of my series of questions. Is there anything you’d like to add?

Sharanya : I’d just like to say that I really hope some of your readers will not just buy my chapbook, but also make their way over to my blog, which is updated fairly regularly. I’m open to being contacted via email for any enquiries. Also, I am doing my first full-length solo spoken word show here in KL in 2007! I would love to have some of your readers in the audience then.

The man of wisdom is never of two minds; the man of benevolence never worries; the man of courage is never afraid.
Confucius
Powered By: WordPress Quotes