Dragon of a Storyteller – interview with Randel McGee (30 July 2009) 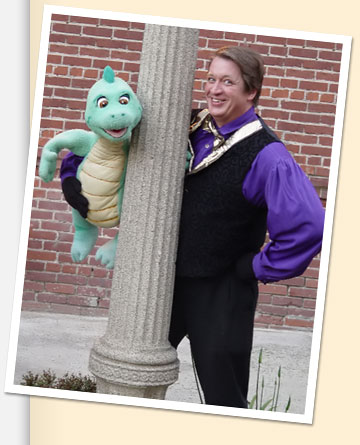 People from the organising team of the Singapore International Storytelling Festival asked if I would interview some of their storytellers. I agreed and I’m glad I did. This is the first interview with some of the storytellers. Without further ado, I have great pleasure in introducing you to Randell McGee …

Aneeta: Randel, thank you for agreeing to this interview.

Randel: I appreciate this opportunity to share with you and your readers!

Aneeta: Let’s start with you. Please tell me a little of your story – where were you born, where did you grow up, what do you do for a living and where do you live now?

Randel:My early years were rather nomadic. I was born in Middletown, Ohio, in the central-eastern part of the USA. My family moved west, first to Utah, then on to Oregon on the West Coast. During my teenage years my family settled in the Seattle, Washington area. I was a volunteer minister for the Church of Jesus Christ of Latter-Day Saints (commonly called Mormons – see www.mormon.org ) in Holland and Belgium for 2 years.

After my missionary service, I returned to the States and went to BrighamYoungUniversity in Utah. While attending BYU I became involved in their Children’s Theater programs. I fell in love with one of the student directors and she has been directing me ever since!  We have lived the last 29 years in Hanford, California, a small community in the farmlands of central California. My wife Marsha and I have five children and four granddaughters.

Except for an 18 month period when I was a church custodian, I have been a professional performer and storyteller my entire adult life. I am celebrating 30 years as a professional ventriloquist this year. What a thrill it is to make this trip to Singapore one of the highlights of this special anniversary year!

Randel:I remember trying to tell stories and jokes to my friends and cousins as a young child in Ohio and Oregon. I guess I had some innate desire to be listened to AND to entertain. I have always been fascinated by language and its power to convey meaning, feelings, ideas, and wonder. There is a marvellous feeling of connection and communication when a teller and a listener are involved in a story together. I really enjoy storytelling for those spiritually fulfilling moments.

Aneeta: It is stated that your portrayal of Hans Christian Anderson gives life and personality to a familiar name and you add new insight to some age-old favourites. Can you give an example of how you give a new insight into an old tale?

Randel: H. C., as his friends called him, was a lively teller, full of ad-libs and sound effects that added drama to his stories.(He was also a very well-known playwright in his day.) He could not quite convey that spontaneity in his writing of the stories, but did as he told the tales to friends and guests. After much research and some personal interpretation, I have added some of that spontaneity and drama, back into the written tales.

I also exercise some “poetic license” with some of his famous stories that have less than happy endings, which many do. For example: His tale of “The Little Mermaid” does not end as “happily ever after” as the Disney version would have us believe. In the original story the Little Mermaid (who is never named anything but the Little Mermaid) never has her love returned by the Prince she has saved. He marries another. Rather than cause him harm to satisfy the demands of the Sea Witch, the Mermaid sacrifices her life. This self-less act ensures that one day she will rise with an immortal soul after many, many years. My “spin” to the story is that the Mermaid’s wait for immortality is shortened each time her spirit passes by a child who is being good and kind, which Andersen alludes to in his story. I feel that emphasizing this positive, participative element keeps the original intent of the author while making the tale more acceptable, i.e. less tragic, to modern audiences.

As a side note: I added the H.C. performances to my repertoire in the mid-90’s. I was looking for other ways to share my storytelling talents. I could make elaborate paper craft designs and items as I told stories, much to the delight and intrigue of my audiences. One day I discovered a book called “The Amazing Papercuttings of Hans Christian Andersen” by Beth Brust and I was spell-bound! I learned that the world-famous storyteller also made paper craft designs as he told stories. I started researching Andersen’s life and stories and soon developed a program portraying him, his stories, AND papercuttings.

Aneeta: On your website, http://www.mcgeeproductions.com,  you mention that the other part of your comedic duo is your puppet-pal, Groark. Tell me about Groark, please. Why a dragon?

Randel: Why not a dragon? 🙂 Dragons are fantasy creatures that could have any kind of personality and are usually depicted as intelligent and capable of speech. Every culture around the world has dragon tales.

I began my performing career as a puppeteer, working with all sorts of puppets – rod, shadow, muppet-style, etc. I had the idea one day of a character/ side-kick that would be a dragon. I made a few quick sketches and later that day showed the sketches to my wife Marsha. A few days later I returned home from my work as church custodian to find Marsha busily at work making a large dragon puppet for me.

I originally had thought of having a horn inside the dragon to make it squeak, but when I saw Marsha’s creation I knew it had to have a voice. The first name that came to me as I picked it up was “Groark!” I thought that was a sound that a dragon would make. I knew a little about ventriloquism, so I started practicing this as I cleaned floors at the church where I worked. I soon started hiring myself out to do birthday parties, then libraries. Next came schools and special events. A funny story or two and an original song have always been parts of my act with Groark.

I have found that Groark has an amazingly fun and endearing personality. His character has grown and developed a lot over the last 30 years. Groark and I have performed all over the USA and Asia (Singapore, Japan on 5 different occasions, and Korea). We are the stars of 2 video series on character education for children and have 2 music CDs. He is like one of the family. My grand daughters love Groark and that has brought a new spark to his personality.

Aneeta: I understand that you will be part of the Singapore International Storytelling Festival this year. Have you been to Singapore before?  Are you looking forward to it and why?

Randel: This will be my second visit to Singapore for the SISF and the Asian Congress of Storytellers. I was invited to attend in 2005 which was H.C. Andersen’s Bicentennial Anniversary. I believe that outside of Denmark, Andersen’s homeland, no other country did as much to celebrate Andersen’s life and legacy as did Singapore in 2005.

During that trip I also brought Groark to assist me with a workshop and for a special children’s performance. I thoroughly enjoyed my first visit to Singapore! It is a lovely, modern city! I appreciate its friendly people and safe society. The foods were wonderful! The audiences were very receptive. Of course I look forward to returning!

Randel: Look for any opportunity to share a story with another; practice on your children and family, your students or classmates. Tell to senior centers, youth groups, church gatherings, social clubs, etc.

As you cater to storytellers, I would also like to share with you my new storytelling blog called www.storyteaching.com . This is especially aimed at those who want to use storytelling to enhance their teaching and presentation skills at school, church, corporate presentations, whatever. I would appreciate your input and the ideas of your readers.

Aneeta: Randel, this is all I have to ask. Is there anything you’d like to add?

Randel:I would just like to add that I am the author of a series of “how to” books called “Paper Craft Fun for Holidays” by Enslow Publishers, Inc. America has very diverse cultural influences. The 6 books of the series contain crafts and short stories about the following holidays: Kwanzaa (an African-American holiday), Valentine’s Day, Chinese New Year, Day of the Dead (a Mexican holiday to celebrate ancestors), Halloween, and Christmas. I hope to have the Chinese New Year and Christmas books available for sale during my visit to Singapore.

Randel:Thank YOU, Aneeta! I look forward to visiting with you in Singapore. I invite your readers to come up and say hello.

The King of Self-Publishing – an interview with Dan Poynter

Do not anticipate trouble, or worry about what may never happen. Keep in the sunlight.
Benjamin Franklin
Powered By: WordPress Quotes