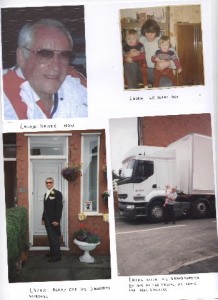 One of the storytellers I interviewed previously, Bill Keeth, recommended I contact Dennis with a request for an interview. I was caught up with so many other things that I had to put this aside. I was, therefore, very grateful when Dennis contacted me himself. His story is interesting and without further ado,I have great pleasure in introducing to you, Dennis Burnier Smith  …

Aneeta: Dennis, thank you for agreeing to this interview.

Dennis: Hi Aneeta. I’ve been looking forward to this and I hope that I can make it interesting.

Aneeta: Let’s start with a little about you. Tell me about where you grew up, what you do for a living, where you live now and any other information you’d like to share with my readers.

Dennis: Well, I am now retired from a lifetime of working in the Haulage and transport industry.

I live, with my wife Elaine, in the Manchester suburb of Blackley Village, where I have lived for fifty years. I was actually brought up, just after the 2nd World War, in Newton Heath, another borough of Manchester, where I lived with my parents and sister in a prefab.

Besides writing I like to paint, using oils, water colours or acrylic paints

Aneeta: How did you first get into writing and storytelling?

Dennis: Because of the career that I followed in the haulage industry, numerous and diverse things happened along the way. When I would come home at the week-end I would regale my friends and associates with humorous stories and escapades that I had experienced or seen. The people that made up my audience for these impromptu revelations often commented that I should write a book concerning all these adventures and mis-adventures. After much deliberation and once I had retired and had some time on my hands I decided to do just that.

Aneeta: I understand you are the author of two books – This Truckin’ Life & The Railway Years. Please describe these two books.
Dennis: This Truckin’ Life is the first book that I undertook; it is an anecdotal work made up of many recollections and reminiscences. The main slant of the book is to the humorous side but the humour is interspersed with informative and more serious chapters. It covers a forty years  years period, chronologically set out, of the life of a truck driver, documenting his life on the road. It delves into the methods resorted to in order to survive and make ends meet in a world where the truck driver is considered the lowest of the low. It tells of hard times and good times in what was then considered a man’s world where hard, relentless toil was the order of the day. The working hours were long and unsocial, the remuneration low, there was no power steering and all loads were sheeted and roped.

The Railway Years, my second undertaking, is once again an anecdotal work which deals with a specific time within the truck drivers life. The times dealt with in this volume are concerned with the drivers times whilst working for British Rail and its subsidiary companies such as NCL, Freightliner and EXEL Logistics. This second volume, once again leans to the humorous side with added informative and more serious issues.

Aneeta: One of the problems I have, when telling my tales, is to make sure that the structure and plot are OK. Do you ever have similar problems, and if so, how do you overcome them?

Dennis: In the type of tales I tell the most important problem that I have to deal with is that of chronology. Because I am stretching my mind back up to forty or more years it is difficult to place things within an exact chronological order. I have, on occasions, used what can only be described as writer’s license and I have placed situations where they sit most comfortably.

Humour is a great leveller and I try to use it a lot in my writings. My works are not mysteries or novels and so the main thread throughout these works is the humour.

I can only hope that people will laugh out loud when reading them as I do when reading the likes of Tom Sharpe. Humour can be found in most situations even, when on the face of things, they appear deadly serious.

Aneeta: Now, one of the things a lot of storytellers tell me is that they find it hard to be motivated and inspired to write. Do you ever face this problem and if so, what do you do?

Dennis: Motivation and inspiration come from many sources; a flashback of memory, a gentle nudge in the right direction from an unsolicited comment, people asking: ’Do you remember the time when….?’ and many other instances, so no, I do not see this as a problem at the moment., although things may be different if I try to turn my hand to fiction.

Aneeta: You use a pseudonym, Laurie Driver. While I think it’s so interesting since it relates to the subject matter of your stories, can I ask, please, why use a pseudonym at all?

Dennis: To be honest, Aneeta, the using of a pseudonym seemed a good idea at the time, borne from the thought that my true moniker, Dennis Smith, seemed a little bland and unlikely to stick in one’s mind.

Dennis: Give it a go. Nothing is born from nothing; if you think you have a story to relate, put pen to paper, fingertips to keyboard and give substance to your thoughts. You never know, you could be the next JK Rowling.

Aneeta: Dennis, this is all I have to ask. Is there anything you’d like to add?

Dennis: Thank you, Aneeta, I have found this a very interesting and exciting occasion. One isn’t often given the chance to express one’s views in this manner and to reach out to people of a like mind

Dennis: Not at all, it has been a great pleasure and I look forward to seeing the interview in print.

My latest book, ‘Thomas John Barnardo, His Life, Homes and Orphanages – A Short History,’ was brought to fruition from listening to tales from my father who, from the age of ten years in 1930 to the age of fifteen was a guest at Barnardo’s, Woodford Boys Garden City, London. He was given up by his mother who, in those somewhat straitened times, could not afford to keep him or his sister who was lodged at the Girl’s Village home at Barkingside, London. Both children were unloved, malnourished and unwanted.

The book tells of Thomas Barnardo’s inauspicious beginnings in Dublin, where he was born, his inauguration into the Plymouth Brethren, his move to the East End of London and the setting up of his first ragged school. It is not just a biography of the man himself, but contains numerous vignettes about the people that were close to him and worked with and financed him, people such as Benjamin Disraeli, Lord Shaftesbury, his wife Syrie Barnardo and James Hudson-Taylor, founder of the China Inland missions.

There are chapters dealing with Barnardo’s somewhat contentious policy of sending children to the commonwealth countries for a better life, his Naval Training Schools, healthcare within the homes, The teaching of trades to enable children to make their way in a cruel world upon leaving the care of Barnardo’s, and a chapter on how Barnardo’s is run today and its charity shops etc. There is a chapter dealing with my father’s time at Barnardo’s.

The children featured on the cover are my father, Auguste Burnier-Smith and his elder half sister Louisa Maud Smith on the day they were taken into care.

Love of a Storyteller – interview with Rolland Love (22 March 2012)

A friend is one who knows us, but loves us anyway.
Jerome Cummings
Powered By: WordPress Quotes