People are most important – interview with Jodi Webb (1 July 2008) 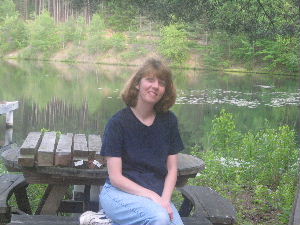 Again, one of the people who responded to my request for a new columnist was Jodi Webb. Without further ado, I have great pleasure in introducing to you, Jodi Webb …

Aneeta: Jodi, thank you for agreeing to this interview.

Jodi:  Well, thanks for asking me.  I have to confess that this feels like a piece of cake—a few weeks ago I was on a writer’s panel where the audience—which was composed of writers– asked questions.  Live audiences are really scary.

Aneeta: Jodi, let’s start with something about you. Tell me a little about where you were born, where you grew up, what you do for a living and where you live now?

Jodi:  I was in a tiny town in northeasternPennsylvania—Pottsville.  It was home to the writer John O’Hara.  I grew up in a tinier town called Cumbola in the same area and now live in an even tinier town (we aren’t even a town).  Actually it’s just a road out in the middle of the woods.  We have a huge meadow, gardens, a pond.  When I tell people where I live I always hear, “I didn’t even know there were houses out there.”  But it’s very relaxing.  I should start my own writer’s retreat.

Aneeta: I understand, from you website (http://www.freewebs.com/wordsbywebb/index.htm) that you’ve written for many magazines and also had your own column. Do you care to elaborate on this?

Jodi:  When I started writing it wasn’t with the idea of this being my career.  My older daughter was an infant and I didn’t want a full time job but I was going crazy so I started writing articles here and there for different regional magazines.  Through the years I also had “real jobs” like teacher, bookkeeper, typist, saleswoman, etc…but I always did a little writing.  Somehow, over the years I began doing more and more writing and less and less “real jobs”.

Like most freelancers I’m always on the look out for that elusive regular gig that at least gives me the illusion that I have a dependable, steady income.  I began writing for a trade magazine Toy Directory Monthly and after a few years they invited my to be their toy mom and write a column for retailers from a parent’s perspective—what do parents want from a toy store.  I also wrote a column for www.writer2writer.com telling readers about writing markets.  My older daughter is now 16(almost 17)and I’m just finishing up my first book Pennsylvania Trivia: Weird, Wacky, and Wild which will be released in September.  I’m also working on a novel that I started this November as part of the NANO challenge(www.nanowrimo.org).  And to round out my schedule are articles, business writing, and an idea for a children’s book I’m playing with.

Jodi:  Although I mainly write nonfiction I’m always very aware of what they drill into you in creative writing classes—if you don’t keep your reader interested they will stop being your reader.  They’ll move on to a TV show, another book, or even the view outside their window.  So I try to present my writing piece—whatever it is—so the reader wants to continue reading.  I think the best way to do that is to focus on personal stories.  For instance I’m writing a story about the Tomb of the Unknown Soldier at ArlingtonCemetery in DC.  Now I can fill it with tons of facts about when it was established, what it’s made of, what general established the tomb guard.  Can hear the words yadda, yadda, yadda in your head?  Instead I’m starting out with the story of a military chaplain who saw an unmarked grave inFrance and felt tormented by it for some reason, even long after he returned from the combat zone.  The people are the most important part of any writing piece—fiction or nonfiction.

Aneeta: Please tell me about some of the more memorable pieces you’ve written.

Jodi:  It’s hard to choose.  Everyone has a story, even if they don’t realize it, and most never get to tell their story to the world.  When someone gets to tell their story through an article I write I like to think it’s memorable to them.  A few years ago I told the story of a second grade school teacher who died of cancer.  Her family set up a foundation called Karen’s Heroes.  Each year the second graders in the school where she taught listen to presentations from five local charities and vote on how to donate a set amount of money.  After the piece ran in American Profile her family received emails from schools across the country who wanted to know how the program worked so they could set up a similar program.  That was incredible to me.

My first day of work at a newspaper a co-worker told me “Just remember, no one reads the bylines except your mother.”  It’s true.  So some of the most memorable pieces for me are ones where people actually took the time to write a letter or email and tell me they liked the piece.  The most memorable ones for me were the ones that were memorable for my readers.  But those contacts with readers are few and far between!

Aneeta: What advice would you give those who would like to venture into the world of storytelling?

Jodi:  Make the personal connection between your reader and your writing.  They should want to continue reading because they identify somehow with the characters or theme of your piece.  Even if it’s about time traveling vampires taking over Mars something about it should ring familiar to them—an emotion, a situation, a relationship.

Aneeta: Jodi, this is all I have to ask. Is there anything you’d like to add?

Jodi:  There are stories everywhere, everyday.  As writers it’s just as important to be able to find those stories as to write the words down on paper.  People were always asking me where I find my stories—finally I wrote an article telling people just how to find story ideas.

Way, away from here! – interview with Steve Robertson (24th of February 2005)

Instincts of a Storyteller – Interview with Sreelata Menon (30 April 2013)

A friend is one who knows us, but loves us anyway.
Jerome Cummings
Powered By: WordPress Quotes