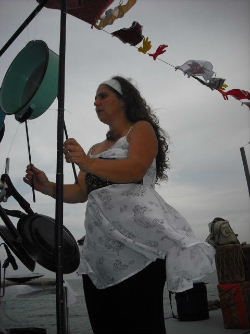 Valentina is involved in the upcoming Singapore International Storytelling Festival. I was asked if I would like to interview a few of the storytellers and I agreed. Valentina has an interesting approach to storytelling; you’ll have to read the interview to find out what it is. Without further ado, I have great pleasure in introducing you to Valentina Ortiz …

Aneeta: Valentina, thank you for agreeing to this interview. Let’s start with you. Please tell me a little of your story – where were you born, where did you grow up, what do you do for a living and where do you live now?

Valentina: I was born in México City but before I was one year old I had started my travels. My father was a painter, passionate with his work, so we went with him to his scholarship in France. Thanks to his life I grew up in several European countries and in touch with several languages. I studied in the French school system and this was probably very important for my formation as a story teller as this education really cultivates literature, writing skills and the use of fantasy and freedom of speech. 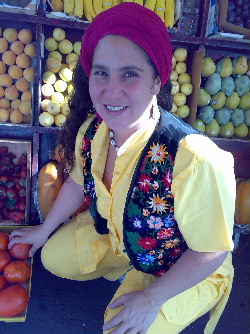 After this I did my university studies and my theatre formation in the United States, at ColumbiaUniversity, in New York, and at several wonderful acting and dance studios in this cultural city.

Then I finally returned to México and plunged into its rich and deeply rooted culture.

Now I work in Mexico City in two areas. I work as a professional salsa musician playing the drums in different bands and I present an experimental music show called Dream Soup, where I make music with objects of our daily life.

Also I work as a story teller giving functions in schools, parties, public meetings, theatres, etc. And I have a Civil Association called Zazanilli, Cuentos Viajeros A.C., dedicated to recuperating stories from the different Mexican communities. With this project I have published 4 books this year, three of stories of under-privileged young women from certain neighbourhoods of Mexico City and one with stories of illiterate mazahua Indian women who have migrated to the city.

Valentina: I started my personal percussion show and felt the need to communicate with the audience through words besides the music. Therefore I started to combine stories with my music and I got “hooked”. I discovered that storytelling is such a direct way of speaking to the people compared to the abstract side of playing music. Also I realized that, in terms of production, to tell stories is much less complicated than to make music, all you need is your voice, your heart to feel the audience, your imagination to build your stories and a lot of work.

Aneeta: On your website, http://valentinaortiz.com, it is stated as follows: Valentina gives a voice to daily domestic tools, through her pots and pans she expresses every day living of Mexican women. Can you please explain this statement and also explain your other sources of inspiration.

Valentina: I literally give a voice to inanimate objects since, in my show called Dream Soup, I make percussion musical pieces by beating on pots, on stones, on pieces of wood, on bottles…It is a way of telling people two basic things: Any person can express him/herself (whether she is trained in the arts or not) with whatever she/he has handy (you don´t need a fancy instrument). You just need to take the time to listen to what surrounds you.

Also through this show, I try to honour the basic things of life: nourishment, the act of preparing every day food as a major act of generosity and love.

Aneeta: I understand that you will be part of the Singapore International Storytelling Festival this year. I see that you have been to Singapore before and performed at the Formula 1 Race. What was that experience like?

Valentina: Being in Singapore for over a month was a life changing experience for me. I had the opportunity to see ways of living, so different from the Mexican reality and this is always very important in ones life. I met marvellous Singaporean women, story tellers, who taught me many things by sharing their every day living with me. 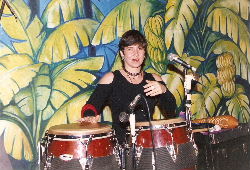 The experience of being at the Formula 1 Race was also a first time for me; I had never been at an automobile race. I played with the Danzonera Band, two different days, for the Formula 1 public. It was a great honour to be at the first night race in history.

I can say watching car races is quite an experience, again I learned that each person has his/her own tastes and passions. In Mexico we say that differences are a great wealth.

Valentina: Go for it. We all have so much to say.

Listen to every single person that is around you; do not underestimate any encounter in your life.

Read a lot, watch good movies. You must constantly work on the structure of everything that you read or see. It must become an obsession for you: whatever you hear find its structure.

I think the key to being a good story teller is to listen, to listen with a clean slate, to the voice of the people and to their silences, to the streets, to the forests even to the sky.

Aneeta: Valentina, this is all I have to ask. Is there anything you’d like to add?

Valentina:I am looking forward to attending the Singapore International Storytelling Festival; it will be very exiting to exchange stories and knowledge with people from so many different countries.

Also I am very happy that I will be able to take to the festival my new record called Earth Stories. It includes 3 stories I wrote, told in English, accompanied by several original musical pieces that I play on traditional Mexican percussion instruments.

Storyteller of the Skies – interview with Elmo Jayawardena (8 February 2009)