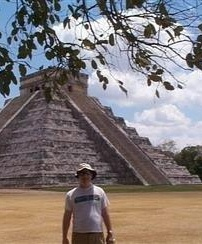 Late last year, Jack sent us his new novel and asked that it be reviewed. When the review was completed, before I could ask Jack if he would agree to an interview, he asked me. I was glad he did as his story is fascinating … as you will see below.

Aneeta:  Hello Jack.  Thank you for agreeing to this interview.

Jack: And thank you, Aneeta.   Also, thank you again for the great review of The Moroni Deception one of your reviewers recently posted.

Aneeta: Let’s start with something about you.  Please tell me where you were born, where did you grow up, what do you do for a living and where do you live now?

Jack: I was born in western North Carolina and first grew up in Chapel Hill, NC where my father was in graduate school. We then moved to a small college town near Charlotte, NC for his first professorial posting, which was where I lived and grew up until I went off to college.  When not writing, I still keep my hand in a small business I started 12 years back and I currently make my home in western North Carolina.

Aneeta:  I’ve read some of the stuff on your website (http://themoronideception.com/) that you’re an avid traveller.  Choose three places that you’ve visited and please tell me why you like them.

Jack: While I like visiting, I guess you could call them “very civilized” places like London, Vienna, and Prague, I seem to enjoy exploring places a little more off the beaten path like Belize and Costa Rica much more (although, I’m not sure how far off the beaten path they’re considered anymore since both countries cater so much to tourism now).  I guess, whether from movies, or all the Westen Civ classes we had going to school and how tied we Americans seem to be to Western/European culture, it just almost feels like I know these other places already, like Paris and Venice and Rome, so that when I go to countries like Belize or Costa Rica which I knew very little about, it just seems like much more of an adventure, not to mention the startling beauty of both countries and the friendliness and openness of the people there.

Aneeta: You also have two dogs.  Who are they and what are their names?

Jack: I have two great dogs, Sweety and Ludie–one was a stray and the other a pound dog.  They’re both getting up in years now, but they have been and continue to be great companions.

Aneeta: So, from what I can understand, you’ve used a lot of your experiences to come up with a novel.  Please describe this novel in detail for me.

Jack:  I guess the best way to describe The Moroni Deception is as a political conspiracy thriller, although it, of course, has a number of the same elements that can be found in a mystery.  The protagonist, Michael Chenault, is an investigative journalist, and after first being wrongly accused of a bizarre ritualistic murder, he realizes that there is a likely connection with the near identical murder of the wife of a Presidential candidate who is murdered in the exact manner two thousand miles away in Salt Lake City.  The other elements introduced are young woman who is junior crime reporter with the Salt Lake Tribune who becomes his part-time assistant on the story as well as a romantic interest, and two Mormon fundamentalist zealots, known as “The Brothers,” who believe themselves to be on a mission from God, and who are tracking Chenault’s movements since they believe he is also trying to find a sacred Mormon artefact that they have been directed by their prophet to retrieve.

Aneeta: Before starting on this novel, did you attend any courses/classes on writing?

Jack: As far as writing classes, I had several in college, and went on to take a number of post graduate screenwriting classes.  Because of my love of movies, screenwriting was my first love, I guess, when it came to writing, so that was mostly what I wrote, other than one brief half-hearted attempt at an earlier novel.  After having the wind taken out of my sails a couple of times, having to do with a screenplay I’d sent to two different director/producers who pretty clearly “borrowed” large chunks of it without paying me for it or giving me any credit, I decided I would give novel writing another go, although it took a while to find something that I could be inspired to not only begin to write, but to actually complete this time.   For that, I would thank Jon Krakauer and his Under the Banner of Heaven.

Aneeta: Naturally, your work will involve storytelling.  What aspects of storytelling did you use most and why?

Jack: Aspects of story telling that I used are the ones that most everybody else uses for this genre.  It was the beleaguered hero on what becomes a personal journey and the obstacles and antagonist he must overcome.  Although, without giving away any spoilers, I tried, and I think, mostly successfully played around with some of those things to add some unpredicted twists.

Aneeta:  As you know, this website caters for storytellers.  What advice would you give those who would like to venture into storytelling?

Jack:  Well, I usually like to lead off with the “don’t give up your day job just yet,” but on a more serious and hopefully helpful note,  for story telling, which by no means is it easy to come up with a good one, it’s still sometimes the easier part if you’re talking about trying to share it with the world (as opposed to just your friends and family) through writing.   Writing, I found, was the much harder part in telling it in such a way as to not give too much away too early, to sprinkle little snippets of clues throughout so that both the protagonist and hopefully the reader gradually pick up upon them, but without being smacked in the face by them, and doing it in such a manner as to put a sort of mosaic or puzzle of clues and information out there to let them eventually be able to finally see the big picture when they stand back to ultimately solve the mystery, as opposed to the standard sort of “Law and Order” manner in which one clue leads to another until they eventually get their man.  While that way– the clue leading to a clue and so on– may seem intricate and clever, it’s really the much easier way–you just basically backward plan.  And the reason I did it this other way was to try to convey how a lot of investigative reporters go about getting their stories.  It’s not all a perfect string of leads and tips leading up to the solving the mystery of their story.  The other hard thing was the pacing–I didn’t want this to necessarily be a roller coaster ride from the very first page to the last, as some similar novels are, because that can actually, I’ve found, when reading them, get a bit exhausting if not tedious, if it’s just one steep hill climb after another, only to race down and then start all over again.  It almost makes it a bit predictable, as in “here we go again” because you do almost know what’s coming if that pattern is just repeated throughout.  My design was to first draw the reader into the story, and have them believe at first that what they were reading could be taken at face value, while at the same time, and perhaps the biggest challenge, make the job of a reporter seem interesting, and then in the last third to half of the novel, put the protagonist and the reader on a roller coaster ride to the end.  So I guess what I’m trying to say is that there’s a whole lot more involved and going on behind the scenes when writing a novel like this than just cranking out a story.

Aneeta:  Jack, this is all I have to ask.  Is there anything you’d like to add?

Jack:   I would just mention that there’s a link for my blog on my book’s website http://themoronideception.com/ that has some good tips for writers, both having to do with promoting their work as well as one of my favorite entries, “Why I write,” that I recently did for a Young Adult book blog.  And if my novel interests you at all, I would mention that the e-Book price was just lowered to $3.99, although it is available as well in trade paperback.  And just to mention again as a reminder, the short shrift description of The Moroni Deception would be “the Mormon Da Vinci Code” as it’s been referred to by some readers and reviewers, although I really think of it having more in common with The Girl With the Dragon Tattoo since it has to do with an investigative journalist delving into the twisted family background of a political candidate as he uncovers a growing conspiracy during a Presidential campaign.

Jack:  Your very welcome, Aneeta.  But again, I would like to thank you very much for this opportunity and getting to participate on your marvellous website.