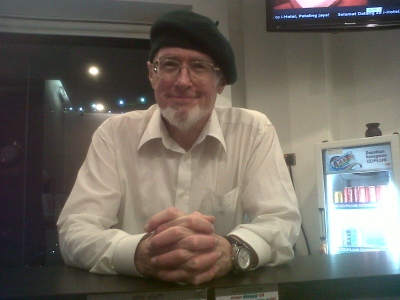 I have been corresponding with David for a long while. Just like the last person I interviewed, from this interview, I realised there’s more to David than I thought. So, without further ado, I have great pleasure in introducing to you, David Ritchie …

Aneeta: David, thank you for agreeing to this interview.

David: It’s wonderful to have this opportunity.

Aneeta: David, let’s start with something about you. Tell me, please, where were you born, where did you grow up, what do you do for a living and where do you live now?

David: Born in Newport News, Virginia, I grew up in the Hampton Roads area, a great seaport. Until let go recently because of my employer’s downsizing, I worked for 11 years as researcher, editor, and writer at a publisher of ESL materials in Korea. At the moment, I’m performing an international job search and working on a new series of books for young readers, in English, for Darakwon Press in Seoul.

These are action stories with Bigfoot, the legendary North American giant ape, as the protagonist — a larger-than-life figure indeed. His adventures are set in an imaginary America, but one enough like reality to make the stories meaningful to young readers.

Writing animal tales of this kind requires the writer to make some difficult judgments. For instance, how p.c. should a Bigfoot be? And on which should he rely more: his wits, or his size and strength? Resolving questions like those will leave you with a complex, sympathetic, yet intriguingly nonhuman character.

Aneeta: How did you begin writing/storytelling/getting involved in the publishing industry?

David: An eager reader of fiction from a very early age, I began writing around age 10 and made journalism and publishing my career after college. Only after coming to Korea, however, did I acquire the skills needed to produce fiction for young readers. For one thing, you must write for a young audience without writing down to them. That’s a hard skill to develop. One can learn much about it from authors such as Walter Brooks (who invented Mr. Ed, the talking horse) and E.B. White, author of Stuart Little and Charlotte’s Web.

Aneeta: Please tell me a little about what you’ve written and published.

David: Under my own name, I have some 20 published books of nonfiction, mostly science and history. To my surprise, one of them — a whimsical look at everyday life in Seoul — appeared on a Korean bestseller list in 2002. Now I’m moving into both fiction and electronic publishing. It’s about time for a switch to e-books, too, as traditional trade book publishing appears moribund, at least in the US.

David: For years, I’ve been making notes for such a book, under the working title Justice Delayed. Excerpts have been posted online at the S&C Community on Facebook. Its thesis is that the ongoing downfall of the American middle class represents justice, in a sense, for European-Americans’ conquest of Native American peoples, and for the seizure of their lands — meaning, essentially, all of the United States.

The American middle class, my people, derived great benefit from that takeover and did much to accomplish it. Now, as if to illustrate how one may inherit responsibility for — and consequences of — the crimes of one’s ancestors, the middle class finds itself plummeting toward the woeful status of Natives on reservations. Look at unemployment figures. Already, some Native reservations are doing better than America as a whole.

Moreover, the agents of the middle class’s devastation are largely the same as those used against America’s aboriginal peoples, such as economic warfare, cultural destruction, ecocide, and drugs.

Consider that last one for a moment. Alcohol destroyed Native American societies. Now, narcotics and mood-altering pharmaceuticals are having a comparable effect on Middle America. I wish there were space here to include some scary figures on drug abuse. They help to illustrate how much of the American population is too impaired to function adequately. In place of the stereotypical “drunken Indian,” we now have a chronically stoned American middle class.

So history is recurring … only this time, the aggressor is getting payback. The process just took a while. Hence the title, Justice Delayed.

In that context, the “justice” involved might be likened to wave reflection. What you send out bounces back at you. So, as the American middle class committed great wrongs around Native Americans, now it’s Middle America’s turn. The wave is rebounding at last. This argument is not original with me, to be sure, but I’m supporting it with fresh information to show how large numbers of once-prosperous American cities are descending toward the impoverished “rez” level.

In short, the similarities between middle-class downfall today and the 19th-century Indian wars are very close and numerous. That is because deeds really do have their recompense. What we did to the Natives, we’re now getting back, with interest.

To use still another metaphor, you reap what you sow. Long ago, Europeans and their descendants sowed something horrible in the Americas. Now the reaping has arrived — or the Reaper, if you prefer.

Having Cherokee ancestry, traceable to one Charlotte Little Paw (1820-1900), gives me a dual perspective on the North American genocide. That perspective has led to an odd schism within me. It’s unsettling to know that the white part of my ancestry tried to exterminate the Native part, and came very close to succeeding. In other words, I belong to a culture of genocide. Once that knowledge hits you, your thinking is never quite the same again.

The perspective of this work does not mean that I claim to speak for Native Americans. That is something I may not presume to do. But Cherokee descent has helped me to see something most Americans either have never been told or would rather ignore: the fact that their country and culture (“civilization” doesn’t sound right) are founded on ethnic cleansing and a monumental land grab, about which generations of American children have been taught an equally colossal set of untruths.

Aneeta: That is fascinating. Clearly, your work involves elements of storytelling. Can you please tell me what you consider to be the most important element in this craft and why?

David: Keep the story moving as fast and forcefully as you can.

Aneeta: David, this is all I have to ask. Is there anything you’d like to add?

David: Studies of Native American myth and legend helped with the conception and writing of this new series of Bigfoot stories. In Bigfoot and the Hungry Hill, for example, Bigfoot must find a way to rescue two men whom the earth literally has swallowed up. In the original legend, “Rabbit and the Devouring Hill,” the rescuer is a very clever rabbit. But Bigfoot made a much more impressive protagonist, and so the legend — modified in the retelling — supplied a great vehicle for him. Bigfoot makes a splendid authority figure: powerful but not brutal, and very cautious about how he uses his tremendous strength.

Writing these stories has involved inventing a whole forest community, including an owl obsessed with air power; a warlike bear and his army; and a worried ferret who serves as the local postman. Considerable thought went into inventing a Bigfoot family, too. They turn out to be much like other families … only bigger. And their culture has some amusing quirks which, I hope, will interest children.

David: Thanks for this invitation, Aneeta. I’m most grateful.