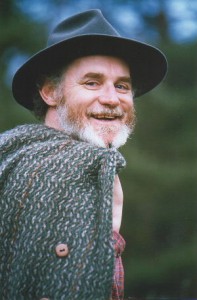 I was looking for suitable people to interview when Karen Chace suggested I contact Jay. I visited his website, read all the stuff about him, was somewhat awed by all he has done and plucked up the courage to send the email requesting an interview. He agreed and I was relieved! Therefore, without further ado, I have great pleasure in introducing to you Jay O’Callahan …

Aneeta: Jay, thank you for agreeing to this interview.

Aneeta: Let us begin with a little information about your early life. Can you please tell me where you grew up, what was your childhood and youth like, where do you live now and what do you do for a living?

Jay: I grew up in Cambridge, Massachusetts and was intrigued with brick sidewalks and the steep stairs in my grandmother’s house. When I was seven my parents bought a big old house in a neighborhood called Pill Hill on the edge of Boston. I would spend my afternoons climbing a beech tree that was seven realms high. I wanted to be a pirate when I grew up. The neighborhood was filled with unusual people who read a lot and liked to gather to sing. I was intrigued with the political currents that sparked the neighborhood.

Now I live in Marshfield, Massachusetts close to the Atlantic Ocean. I’m a storyteller and spend my time creating stories, giving workshops and telling stories. Three of my stories have become children’s picture books and a favorite one, “Raspberries,” is in the works. The rest of my work is on CDs because the sound of the characters’ voices is so important. I perform my long works in theatres and occasionally work with orchestras.

Aneeta: When did you decide to call yourself a storyteller?

Aneeta: The storytelling credits to your name are many and I must admit, I’m somewhat in awe of all that you’ve achieved. Tell me, please, of all the accolades that you’ve received as a storyteller, which one has meant the most to you and why?

Jay: Last week I did a workshop in Alabama with musicians, ministers and people interested in the spiritual life. After I told a story about climbing the “Big Tree” seven realms high, one of the ministers said, “Keep climbing.” He meant keep exploring the spiritual life, and that was the best accolade.

Aneeta: I’ve done this next bit with a few of the people I’ve interviewed and it’s always been a success. Therefore, I’m going to ask the same of you: would you please share with us a short story?

Jay: As a little boy I was upset with what happened to Humpty Dumpty, so recently I wrote this story. I’ll also include another story, “Jonathan,” in case your readers aren’t familiar with nursery rhymes.

One fine spring day
Early in May
Humpty Dumpty climbed
High on a wall.
He was feeling quite smooth
And round and tall.

He sang a ditty,
He thought rather pretty.
“London Bridge is falling down,
Falling down, falling . . .
Ohhh . . . Hellllllllllp!”
Humpty Dumpy had a great fall
From the wall.

All the king’s horses
And all the king’s men,
“We can’t put you together again. Good day.”
“No stay,” begged Humpty Dumpty.
“I’ve got a glue called lumpty.
It was in my pocket,
With my locket.
And it dropped on the beach.
Just out of reach.”
But the King’s men left,
Humpty Dumpty bereft.

Simon yelled, “Jack and Jill! Come down the hill.
And Little Old Woman come out of your shoe,
And bring all of your children too.
And dear cat with your fiddle
Come and don’t diddle.
Humpty Dumpty’s in trouble
We must go on the double.”

They found Humpty Dumpty
And the glue he called lumpty.
They put a bit on the bottom,
And a bit on the top
So he could bop.
Some on his side
So he could roll and slide
Some on a curve.
And Humpty Dumpty sighed, “It’s more than I deserve.
I’ve a crack here and a crack there.
And down his cheek ran a tear.
But my fall from the wall,
Gives me the chance to say
Again we can play
Thanks to one and all.”

The cat fiddled a tune
He got from his pappy,
That made them all happy.
And the cow jumped over the moon.

A few years ago at the National Storytelling Festival in Jonesborough, Tennessee, I’d just finished telling stories.  I was crossing Main Street and there were thousands of people on the street.  A woman tapped me on the shoulder and said, “Can I tell you a story?”  I was rushing off to another performance, but there was something about her eyes that made me pause.  I said, “All right, let’s sit down.”

The woman said, “You may not remember, but you did me a favor in Michigan years ago and I want to pay you back with this story.  I work with children who are dying of cancer.  I was working with Jonathan, who was eleven, and dying of leukaemia.  Jonathan said to his parents, “When I die, cast my ashes on Lake Michigan.”

When Jonathan died, his parents and his brother, Charlie, who was five, went out on their boat on Lake Michigan and cast Jonathan’s ashes on the waters.  A Monarch butterfly flew down to the boat and Jonathan’s mother said, “Look!  That’s Jonathan!”

The next day they went out on the boat and again a Monarch butterfly flew down to the boat and Charlie, five, said, “Look! That’s Jonathan!”

The next day they were on the beach at Lake Michigan.  Charlie had a stick and was stirring up the sand.  An old, grey moth flew up from the sand and Charlie shouted, “Look!  That’s Jonathan. . . . but he’s wearing a different shirt!”

I went on to the next performance at the storytelling festival and told everyone about a five-year-old poet named, Charlie.

Aneeta: Thank you. One of the problems I’ve always faced is the structure of any story I tell. As a lot of my tales are based on what happens around me, the tales can be very complex and I often get tangled up in the many narratives. My question, therefore, is have you ever had problems in terms of structuring your tales and how do you overcome them?

Jay: The structure of every story differs. For me it evolves out of the story itself. There’s a long story called “Father Joe” where part of the story takes place in college and part takes place on board an aircraft carrier during World War II. I used to tell the college  part first and the battle part, on board the carrier, second. Then I reversed. Neither worked. My friend, Doug Lipman, a superb storytelling coach, said, “You’ve tried everything now break the story up.” So now there’s a college  scene followed by a shipboard scene followed by a college scene, etc. Now the story has integrity. Sometimes it’s crucial to have a good listener and a good coach. It’s also important to experiment and generally that leads me to the right structure.

Aneeta: On your website, http://www.ocallahan.com, it is clearly stated that you’re working on a novel. Are you able to share with us a little of what it’s about?

Jay: The novel is called HARRY’S OUR MAN. It’s about an assistant history professor who cannot get over the memory of being in Hiroshima a month after the atomic bomb was dropped. The memory of that causes him to run for Congress and that sets off a wild series of events that change his life.

Aneeta: As you know, this website caters for storytellers. Do you have any advice for people who would like to become storytellers?

Jay: My advice for people who’d like to become storytellers is to tell, tell, tell. When I was a boy of fourteen I told hundreds of stories to my little brother and sister. I kept telling stories informally to children at family gatherings and parties. Then when my own children were born I began to tell them hundreds and hundreds of stories and that led me to becoming a storytelling.

Aneeta: Jay, this is all I have to ask. Is there anything you’d like to add?

Jay: Storytelling is not only fun it’s a way of playing with language, sound, gesture and the mystery of life.

The King of Self-Publishing – an interview with Dan Poynter