Voice of a Storyteller – Interview with Terry Elston (2 March 2012) 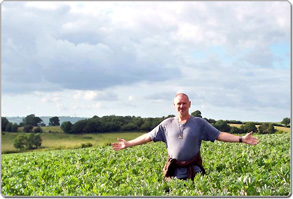 Terry wrote to me a few weeks ago telling me a little about his work. This interview shares with us his story and information about his book. Without further ado, let me introduce you to Terry Elston …

Aneeta: Terry, thank you for agreeing to this interview. Please tell me a little about your early life – where were you born, where did you grow up, what you do for a living and where do you live now?

Terry: Hi Aneeta. I was born in Northwood in a police station of all places! My father was in the police at the time, so we had a flat there and I was born at home. I now live in Brighton.

Aneeta: Before I discuss your books, tell me why NLP? What attracted you this kind of work?

Terry: I was already setting up as a coach when, on holiday, I witnessed my flat mates having an allergy for cats removed. I wondered where the manual for that was? It certainly wasn’t in a coaching manual. I knew the person that did that was an NLP Practitioner. Later on, when I was blocked and not motivated, I thought I’d try her out. It worked perfectly and I was hooked!

Aneeta: Tell me about your books. What are they about?

Terry: The book I’m most proud about is called The ABC of Abundant Living. I’ve written three other books on NLP and two other books, yet this is my favourite. It’s everything I’ve ever learned about life and the secrets it holds. I’ve had a colourful life with many experiences and many good teachers. The esoteric part of my life has been nurtured and I’ve been privileged to have been given many ‘secrets’ to share.

Aneeta: Does your work involve any elements of storytelling? If so, how?

Terry: Everything is a story to me: It just depends which way you’d like to tell the story. My stories usually have a web woven in the matrix of life with many players coming to act as resources in this magical world. I also weave in many quotes from others and myself to bring the pages to life.

Aneeta: As you know, this website caters for storytellers. What advice would you give those who would like to start storytelling?

Terry: Start with your ability to use metaphor. You can say that a ‘tree is over the hill’ – or “the dew settled nicely onto the map of dampened grass, while the tallest of trees beckoned to the others to be as big and proud to challenge even the hills around”.

Aneeta: This is all I have to ask. Is there anything you’d like to add?

Terry: I’d like to share one secret to anyone who is listening. There are many lives you can lead and voices you can listen to. And there is one that calls you and shows you paths to follow that will nurture all the seeds you want to plant. Listen carefully to that voice.