Instincts of a Storyteller – Interview with Sreelata Menon (30 April 2013) 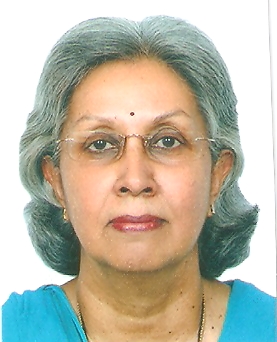 I met Sreelata a few years ago. She was on holiday in Malaysia and the other couple who accompanied her and her husband are very close family friends of ours. I’ve been trying, ever since, to get this interview with Sreelata and I’m glad it’s finally happened. Without further ado, let me introduce you to Sreelata Menon …

Aneeta: Sreelata, thank you so much for agreeing to this interview.

Sreelata: You are welcome. I am honored to be doing this

Aneeta: Let’s start with something about you: where were you born, where did you grow up, what do you do for a living and where do you live now?

Sreelata: I was born in Palghat Kerala at my maternal grandparents’ home. My father was a bureaucrat so my parents lived in Delhi at the time but his being a transferable job I went to school in Madras and Cochin as well. I finally finished University in Bombay. So you could say I grew up all over the country really.

Well I’d like to say we are settled in Gurgaon Delhi. But we spend a lot of time in Bangalore as well. But again at the moment I’m in Dhaka Bangladesh as my husband’s on a World Bank administered project here.

Aneeta: From what I can remember, your husband’s job entails lots of travel. I assume you travelled with him. Please tell me some of the more interesting places you’ve visited.

Sreelata: Oh yes. I’ve managed to see a large part of the world thanks to his job. Cyprus was one. Bern was another- among many others. But the last one and in my opinion the most interesting place recently was South Sudan. We were in Juba- its new capital as it was gaining independence and becoming a new country. That was exciting .To be actually witnessing a moment in history.

There was nothing by way of infrastructure there. No roads or shops as we have them here. Nothing really. And we lived in self contained containers. But these containers were nicely done up and had everything from geysers to fridges in them. They were converted homes in well tended camps on the Nile. And again that was pretty thrilling too.

Aneeta: At the end of your email, you’ve got this statement: ‘A freelance writer who writes on anything and everything!’ What are some of the more interesting topics you’ve worked on?

Sreelata: I have written on almost everything and I’m still writing on anything that comes my way. Politics to media to the need for privacy to even editors and why they are the way they are. Literally anything! Nowadays it’s largely travel pieces.

Sreelata: Penguin has this section called Puffin Lives-for young readers- which deal with the biographies of well known personalities-historical as well as contemporary. Guru Nanak is a part of four such luminaries brought out last year. The back cover of the book describes it perfectly.

It says: The founding father of Sikhism; Guru Nanak Dev was born in a little village near Lahore in Pakistan in the year 1469. In an age of religious orthodoxy; hate and disharmony; Guru Nanak came to preach and convert; to blaze a new trail. Sreelata Menon traces the life and times of this spiritual master. She brings to life stories of the birth; childhood and the search for enlightenment of a little boy who; unhappy with the social conditions existing around him; sought to make a difference as he grew up. With Mardana; his best friend and companion; Guru Nanak spent twenty years and more travelling the world to spread his message of love; truth; compassion and One God. Come rain or shine; braving all odds; winning over all kinds of people and performing miracles through the power of prayer; he spread the word of God. This is the story of an extraordinary man; who was the very embodiment of the love and compassion that he preached.

Aneeta: Clearly, storytelling will feature in your work. Which element of storytelling do you think is most important?

Sreelata: The element of mystery. A sense of eager anticipation is an important part of storytelling if you want to capture the interest of the reader and keep it there. Storytelling is the art of clearing up a mystery isn’t it? An unravelling of facts. And that is something I relate to strongly. Actually all my pieces though they are nonfiction have a strong element of this sense in them. Be it facts or even a must-see place in a travel piece-I try to make them unfold or unfurl at an even pace so that it reads like a story. Even my first book ‘Freelance Writing for the newbie writer’ reads much like a story of how to go about freelance writing.

The element of telling a story in the style of ‘once upon a time’ and creating a sense of anticipation is I feel very important to storytelling. If that sense of expectation is not there even the best of ideas will not work. So a tale that needs to be peeled off layer by layer with a certain amount of expectancy is I would think the art of how to tell a great story.

My third book, the next Puffin due to come out soon is on one of our famous political figures. And I have tried to employ this there to the best of my ability.

Aneeta: As you know, this website is for storytellers. What advice would you give to those who would like to venture into storytelling?

Sreelata: Go with your instincts when you begin a story. Keep it alive with some mystery –a sense of anticipation- even if it’s a piece on ‘dry irrigation’ and never forget to tie up the loose ends satisfactorily.

Aneeta: Sreelata, this is all I have to ask. Is there anything you’d like to add?

Sreelata: No nothing Aneeta. Except that I thoroughly enjoy your newsletters. I look forward to the columns in it and the varied topics on story telling you cover. You’ve got a great website going.

The Bully Book Storyteller – interview with Rita Toews (13 May 2009)