Tapestry of Dance by Aneeta Sundararaj 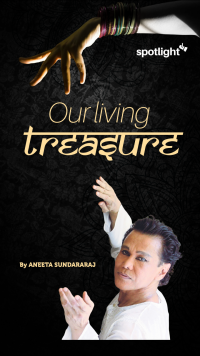 [This article was first published on ‘LET’ which is the online app for New Straits Times in August 2016. I am so proud of this story that I asked for and received permission from the New Straits Times to publish it here.]

It’s the 1980s and in Stadium Dato’ Syed Omar, Alor Setar, a man performs an Indian classical dance at the invitation of the Sultan of Kedah (our present Agong). In the audience is a little girl who eagerly explains to her astounded father every single one of the 10 incarnations of Lord Vishnu that the dancer is depicting. At the end of the performance, the little girl lets out a contented sigh. She prays that one day, she will be given the chance to see him dance again. Today, the stadium no longer exists, the little girl’s all grown up and the dancer is now a celebrated icon known to all as Datuk Ramli Ibrahim. When I tell him that the little girl in the story above was me, Ramli responds with, “But darling, that was more than thirty years ago!”

With a broad smile, the multiple award-winning artiste insists that my story is another example of how well he connects with children. As the Chairman of Sutra Foundation, he’s keen to create a strong bank of new talent and is involved in an outreach programme which offers dance training to children outside Kuala Lumpur. An initiative of Sutra Foundation, this programme is supported with funding from Yayasan myNADI and ECM Libra.

Straightening the kurta he’s changed into to perform a short piece for us, Ramli steps onto the ‘stage’ in the garden of his home in Petaling Jaya. He winces when his feet touch the sun-soaked platform in the middle of a large fish pond and says: “Right in the middle here is a piece of granite I brought back from the Himalayas. I went to the base camp on 9 September 1999.”

As he begins to dance to the tune of ‘Lalitha Lavanga’ by Skikil Gurucharan and Anil Srinivasan, there is a sudden breeze. The palm fronds, leaves of the bougainvillea and surrounding bushes all rustle, as though Mother Nature appreciates this impromptu performance.

When it’s over, with a refreshing drink in hand, 63-year-old Ramli sits down to discuss his interest in developing talent amongst the younger generation. He complains that many urban children today are weaker and poorly coordianted. They are clumsy and when he asks the parents why, most confess that their children hardly go out to play. Shaking his head, he laments: “It’s a pity since Nature is the greatest teacher.”

Describing performances as a ‘tapestry of things that happen’, Ramli believes that Indian classical dances have the power to transform and are capable of empowering youths physically, emotionally and spiritually. Echoing the thoughts of Dr. Dinanath Pathy, Ramli also believes that dance doesn’t just happen on stage, but emerges from a cultural tradition. Dr. Pathy is a literary and visual consultant to Sutra Foundation and is credited with conceiving the theme and visual images for the recently completed performance of ‘Ganjam’ by the Sutra Foundation.

The branch of Indian classical dance that Ramli chooses to teach his students in the outreach programme is mainly Odissi. A classical dance form from Eastern India, he feels that it exposes students to life-long virtues such as discipline, commitment to self and also as participating members of a group or community. Lessons are held during the weekends: On Saturdays, Ramli goes to Kuala Selangor and Ladang Sg. Choch to teach there. On Sundays, he goes back to his hometown, Kajang, to teach at a school.

“This is the only time when they [his students] are allowed to make mistakes,” he says, his tone instantly hard, indicating the level of discipline he demands from his students. In fact, he expects the established dances of his Sutra Dance Theatre to be part of this endeavour. When he detects a reluctance on their part to give of themselves to these under-privileged children, he admits to feeling nauseated. He is quick to add: “I tell my dancers that since dance has given them so much, they must give back. These are their own people. Other Indians.”

There are two major philosophical and literary principles from Greek mythology that underlie Ramli’s approach to dance – the Apollonian and Dionysian principles. In Greek mythology, Apollo and Dionysius were the sons of Zeus. Apollo represents order, predictability and stability. “Look at university. It’s symmetrical and has to give an idea of stability. But with Dionysian, nothing is symmetrical,” explains Ramli. Dionysius is all about chaos, instability and surprise. Throughout his work a creative director and dancer, Ramli tries to strike the balance between these two principles.

Sighing, he leans back and says: “I’ve been reading Jung lately and I’m starting to think about my childhood again.” Admitting that he’s a born performer, Ramli’s parents left him alone for most of the time, which allowed him to explore his surroundings and be creative. At that moment, a Labrador Retriever and a cat, two of the many pets that roam freely in Ramli’s house, make an entrance and seek his attention. Duly petted, they move away and Ramli tells of his compassion for animals and an innate desire to observe nature: “I would wake up early in the morning just to see how a flower develops.”

As the youngest in the family, Ramli was a precocious child. Cheeky grin in place, he says: “If my mother told me not to do something, that was exactly what I’d do.” And since Ramli’s mother (Kamariah) told him not to swim, he did precisely that. But he excelled at it during his time at the Royal Military College and when he went to Australia in the 1970s, he took it one step further and learned to surf.

The sense of freedom he experienced in Australia meant that less than two months after his arrival in Perth to complete a degree in Engineering from the University of Western Australia, Ramli bought a VW and drove all over. After his studies were over, he followed his heart and pursued dance. Ramli explained the conviction to turn his back on a supposedly ‘steady career’ and follow his passion when he wrote the following passage in a coffee-table book called ‘Quintessential Sutra’:

Dance is not just a craft. It is a passion – and more than that, it is a calling. I realised long ago that the gift of talent is a golden opportunity to fulfil one’s reason for being. I love to quote Martha Graham who said – ‘I did not choose to dance. Dance chose me.’

Having been based in Malaysia since the 1980s, this life-long performer still ‘speaks the language of dance’ which he calls ‘rasa’ and gives a somewhat profound explanation of what he means: in simple terms, the lyrics for Indian classical music can be called a ‘shloka’ (a couplet of Sanskrit verse). “In dance, learning what the shloka means is not as wonderful as learning what the shokla is imagined. [When I dance], I identify with my own spirit first, then the audience.” In so doing, the audience, be they a little girl or even the Sultan himself, becomes secondary to Ramli’s dance.

Not willing to be specific about his future plans, Ramli’s concluding comment is perceptive indeed: “I try not to be too specific about the future. I can set a goal and destiny will look after itself. If the endurability of the human spirit deserves it, it’ll happen.”

4 thoughts on “Tapestry of Dance by Aneeta Sundararaj”